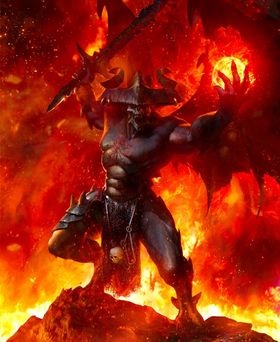 Be'lakor, the Dark Master[8], also known as the First Prince of Chaos[2] and the One Who Heralds the Conquerors[4], is a Daemon Prince of Chaos Undivided, he beholds each of the Chaos Gods equally. Like a petulant first-born son, he is jealous of anyone that wins the favor of Chaos, and thus seeks to undermine them.[2] 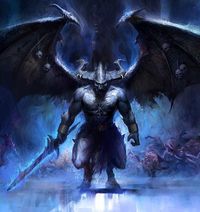 Be'lakor, the First Prince of Chaos

Be'lakor was the first mortal elevated to Daemonhood by Chaos. However, much of his origins are hidden behind legend and rumour, tales torn from the tongues of captive Daemons or as forbidden lore recorded in ancient crypts. Legends tell of Be’lakor ruling over mortal empires since the dawn of time, the Daemon Prince conquering a world and subjugating its people, forcing them to worship him as a god. When the race would fall into decline, ruined by Be’lakor’s greed and malevolence, the Daemon would move on, finding a new burgeoning race to be his playthings. Several times, the Daemon Prince is said to have been the lord of sector spanning empires, a dark daemonic god ruling over a thousand worlds and billions of loyal followers.[8] Even the Grey Knights know very little of his history, what little information remaining suggesting that he has been ruling over mortal empires since the dawn of time, only to abandon them when they would fall into decline.[2] Even this is just supposition, however, as these exist as impossible lies and conflicting fabrications.[8]

Whilst it is unclear how Be'lakor managed to draw the gaze of the Chaos Gods, he became the first mortal to be blessed by all four Ruinous Powers and becmae the first Daemon Prince. This would soon prove to be a mistake, however, as the Chaos Gods do not share for long, and soon they began to squabble for control over this winged Daemon Prince. But Be'lakor could and would not be tamed. Soon, the Chaos Gods gave up on trying to control the uncontrollable Daemon Prince, opting instead to invest their will in other mortals in the known universe. Although Be'lakor remainted the strongest of the Daemon Princes, his power was greatly diminished as the Ruinous Powers began to put forth their own energies into other Daemon Prince. Since then, Be'lakor has held a bitter jealousy towards anyone who wins the favour of the Dark Gods. As such, he is known to undermine the plans of the servants of Chaos, a master of shadows exerting his will in subverting the intentions of the Dark Gods.[8] However, what he believes to be his free-will, is just a part of the rivalry between the Chaos Gods themselves.[2]

One soul who succeeded in escaping Be'lakor's grasp is Ahzek Ahriman, who bound the Daemon Prince after tricking him into thinking he had lured Ahriman into a trap. In exchange for being released from Ahriman's control, Be'lakor reluctantly agreed to relinquish his claims on the soul of the Sorcerer Ctesias.[5]

Relics and the ruins of dead worlds still exist that suggest there may be some truth to these legends; whether their source was Be'lakor or not is more difficult to say. The Adeptus Mechanicus Tech-Magos Kyber spent his life piecing together the history of Be'lakor in his exploration of the galactic wilderness, hunting down ancient relics of the Dark Age of Technology. Following the faint trail left by Be'lakor's passage through history, Magos Kyber found winged statues carved from the fossilized bones of psykers and crumbling scrolls of human skin that show thousands of tiny figures bowing down before a dark winged shape and stygian horn-fragments sealed in sacred caskets. Unaware of Be'lakor's true nature, Kyber became convinced that all these objects are linked to one Xenos overlord, an ancient creature that had existed for millions of years in various guises and was behind countless vile deeds.[2]

Unknown to Kyber, he was manipulated by Be'lakor. The Daemon Prince placed the first clues to his existence in Kyber's path, leading the Magos to the ruins of a world he once ruled. From this seed of curiosity, Kyber has discovered new systems, planets and ruined empires long forgotten by Be'lakor. While the Daemon was helping Kyber from the shadows, the Magos had gathered up the hidden and forgotten legacy Be'lakor has left behind, ultimately returning to the Daemon Prince his lost objects of power, while also erasing the Dark Master's existence from history.[2]

Be'lakor began to influence events around Abaddon the Despoiler, the Warmaster of Chaos. He was rumoured to have manipulated the Daemon Prince Tallomin in aiding Abaddon's assault of Cadia during the Third Black Crusade, and during the Sixth Black Crusade informed Abaddon of Drecarth the Sightless's treachery, ultimately leading to the destruction of the the Sons of the Eye. By the time of the Thirteenth Black Crusade, Be'lakor had managed to work his way into Abaddon's inner circle.[2]

In 999.M41, Be'lakor allied with the Warsmith Shon'tu in a plan to hijack the Phalanx and use it to bombard Terra. In the ensuing Battle of the Phalanx, Be'lakor's Daemonic hordes battled the Imperial Fists 3rd Company.[1] However, Be'lakor was ultimately foiled by the ghostly Legion of the Damned and forced to retreat.[6]

Since the formation of the Great Rift due to the destruction of Cadia, Be'lakor has pledged his daemonic legions in the service of Abaddon and his Black Legion, though his intentions remains unknown.[8]

During the Indomitus Crusade, Be'lakor became aware of Typhus the Traveller's invasion of the Charadon system and launched an invasion of his personal daemonic legion, the Disciples of Be'lakor. Allying with the Word Bearers Traitor Legion, he has begun his assault upon the Charadon Sector.[11] During the war he managed to annihilate House Raven Homeworld of Kolossi.[24]