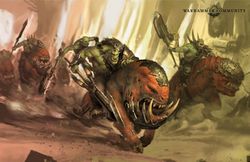 Beast Snaggas are an Ork 'subkultur'.[2]

Beast Snaggas are nomadic Orks who have embraced traditionalism and have disdain for armored vehicles, instead using many variations of Squigs to battle. They aim to hunt the largest creatures and machines, ranging from tanks and monsters to even Titans.[7] Beast Snaggas come predominantly from the Snakebites Clan, due to their appreciation for "da old wayz", and their disregard for more complex technology, although they can be found across the entire spectrum of Ork society. Beast Snaggas live for the hunt, and spend most of their lives in pursuit of it. To facilitate the hunt, Beast Snaggas stay highly mobile and rarely halt for any length of time, even eating, sleeping, and practicing their crude surgeries on the move. Beast Snaggas are very unsubtle hunters, with their mobile caravans producing thunderous noise and leaving waves of dust and mayhem in its wake. The ultimate objective for these Snagga tribes are to find the largest and toughest prey to hunt down. Worthy prey are considered not just to be biological monsters or Tyranid creatures but even large war vehicles and Titans. Their prey is not chosen at random, but is instead are chosen by their bosses and guided by Wurrboyz.[7]

Due to them spending most of their lives hunting the largest beasts they can find, they are hulking mountains of muscle, even by Ork standards.[2] While not as durable as a Nob, they can hit just as hard.[3] Their favored weapon are harpoon-weapons dubbed "Stikkas", which is used to immobilize prey for the final blow.[7]

Beast Snaggas Gretchin are affectionately dubbed 'saddlegitz', and are a smidge braver than most members of their species.[2] Within Beast Snagga society, one is not considered a proper lad until they sport a scar or some sort of injury sustained at the jaws of their Squigs. This exemplifies the close attachment that Beast Snaggas have to Squigs. Besides mounts, they use Squigs for oil, messages, targeting, and more.[7]