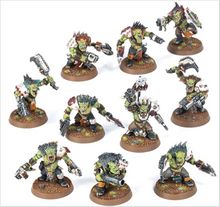 While many Beast Snaggas go into battle aboard Squighogz, Beast Snagga boys prefer to fight on their own two feet. A lifetime of hunting dangerous beasts has made them larger and stronger than most Boyz, though they still not as durable as a Nob. However their strength makes them especially prone to lording it over the Boyz they charge alongside.[1]