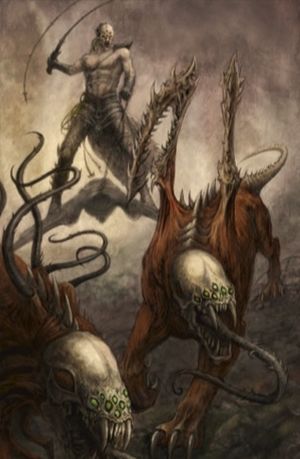 Beastmasters are Dark Eldar that subjugate deadly beasts for use in war or in the gladiatorial arenas of Commorragh.

The wild hunts Beastmasters stage in the arenas remain a popular favourite of the crowds. Although the Beastmasters are part of the Wych Cults, they keep themselves distant from the Wyches and are also predominantly male, unlike the mostly female Wyches.[1]

Some suspect that Beastmasters have roots in shamanic traditions, as when entering battle they adorn themselves in totems and masks that echo the beasts under their control. In fact, their masks contain complex sonic emitters and pheromone traps that can partially control the beasts, although all Beastmasters, even unmasked, have a natural ability to dominate lower creatures.[1]

Beastmasters will gladly accompany Dark Eldar raids into Realspace, driving their herds of beasts into a bloodlust using whips and lures as they hover safely above the frenzy upon modified skyboards.[1]

The beasts most commonly seen in the company of Beastmasters are[1]:

The Clawed Fiends, Khymeraes and Razorwings are the most popular beasts and remain in almost constant use by Beastmasters. Occasionally, though, rare beasts will be captured such as a Space Marine.[1] 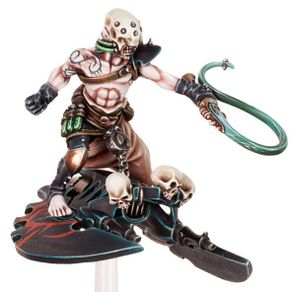