Belial IV was one of the early Eldar homeworlds, however, its fate was never to really be. After the Fall of the Eldar it was pulled into the Eye of Terror and is now a Crone World, deserted and abandoned.[Needs Citation] 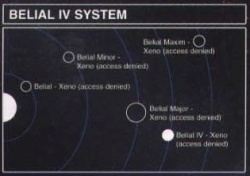 Map of the Belial System.

Belial IV is home the Temple-Palace of Asuryan containing a sacred Eldar artefact of black crystal, the Deathsword, a sword forged from the energies of death.[2] In 334.M36, it was raided for Spirit Stones by the Twelve Outcasts of Alaitoc.[3]

During the Abyssal Crusade, the Brothers of the Anvil were captured by Dark Eldar raiders on the surface of Belial IV.[1] Later in Abaddon the Despoiler's Thirteenth Black Crusade, the Word Bearers constructed the Black Cathedral there and began to worship the Chaos Gods. Their dedicated worship was able to stem the Warp Storms surrounding Cadia; which stabilized the existence of Daemons that were summoned on nearby worlds[5]. However, the Eldar later managed to scour the surface of Belial IV. While the Eldar are believed to have left, its part in the return of the Craftworld Altansar should be noted.[Needs Citation]

Shortly after the 13th Black Crusade, the Ynarri led an expedition to Belial IV to capture one of the Crone Swords, battling Daemons along the way.[6]