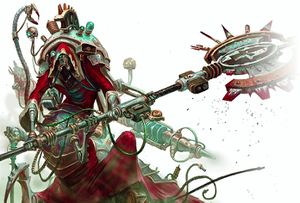 Belisarius Cawl is an Archmagos Dominus of the Adeptus Mechanicus who has been involved in one of the Imperium's greatest secrets for many centuries. He first appeared openly during the Thirteenth Black Crusade of the late 41st Millennium. Cawl is known as the Dominatus Dominus, the Master of Masters, one of the highest ranks available in the Mechanicum.[6] Unlike many Tech-Priests within the Mechanicum he does not seek to copy or discover lost technology, but to innovate.[7]

The young Belisarius Cawl during the Horus Heresy

Cawl himself is over ten thousand years old, predating even the Imperium itself, though how exactly he has sustained his life for so long is unknown. Cawl has been memory wiped at least twice, leaving his own origins a mystery even to himself.[6] It is thought that he has used forbidden alien methods technology with mechanical bionics to sustain his life at the cost of any humanity he may have had left.[5]

Cawl was born on Mars sometime in M31 in the facilities of Xanthe Terra which belonged to Magos Biologis Hammareth. Like most Martian children he was vat-born and at the time of his birth already was a young adolescent. However unlike most children he was able to speak normally at the time of his birth, a result of absorbing the inloaded data while he was being grown in his vat.[9e] Cawl first appears in history during the Horus Heresy, where he was a Tech-Acolyte on the Mechanicum world of Trisolian-A4. He was trained under Hester Aspertia Sigma-Sigma, herself a master of soul-merging.[9a] Cawl, the last remaining disciple of the art of soul merging, at this time maintained that the Emperor was the Omnissiah, but disagreed with a great deal of Mechanicum dogma as he felt they should innovate rather than ritualistically maintain. He believed in the human form, and refused many of the more visible cybernetic modifications utilized by other Tech-Priests. However during this time, the young Cawl secretly performed illegal brain enhancement surgeries on himself in order to increase his own intelligence.[8a] Later the Trisolian System assaulted by traitor forces led by Horus himself, and Cawl was betrayed when his master Hester Aspertia Sigma-Sigma defected to the Warmaster. He became disgusted at the sight of the corrupted Horus, but feigned submission to survive. Later during the battle, Cawl, along with his colleague Friedisch Adum Ship Qvo were able to kill Aspertia and escape the Trisolian System - but not before Cawl absorbed his masters intelligence core and mastery of cloning.[8b]

Following Trisolian, Cawl and Friedisch went to Terra where he came under the tutelage of Ezekiel Sedayne. In truth, Sedayne simply wanted Cawl's knowledge to achieve immortality so he may continue the work of the Emperor. Sedayne threatened Friedisch's life to try and merge his soul with Cawl's body and achieve eternal life. However unexpectedly, Sedayne's personality was overpowered by Cawl and he emerged as the dominant personality. Upon awakening Cawl relived a memory of Sedayne meeting the Emperor during the Unification Wars. In the memory the Master of Mankind was speaking directly to Cawl in the future as he had foreseen Sedayne's ultimate fate. He stated that Cawl must continue His work, even when the day came when Cawl thinks he has betrayed Him. Cawl was horrified by the idea of ever betraying the Emperor.[5a]

After the Heresy Cawl was charged by Roboute Guilliman to oversee two great tasks should the Primarch fall. They were to be the resurrection of Guilliman and the creation of the Primaris Space Marines with the Sangprimus Portum, two things he worked on for the next 10 millennia. During his ten thousand years of work, Cawl changed dramatically. He began to combine more entities within his own intelligence core, becoming in essence a legion of separate beings described as a mesh of souls rather than a combination of minds. These include Ezekiel Sedayne as well as Hester Aspertia Sigma-Sigma. Over time, Cawl began to lose much of his memory as he was forced to dump data around every 500 years.[9]

At the time of the 13th Black Crusade, Cawl was guided by a Harlequin Shadowseer to a planet which was long-abandoned during the 4th Black Crusade. After battling Orks on the world he recovered an artifact and learned of the Pylons holding back the Immaterium. He was then instructed by this mysterious Shadowseer to go to Cadia, where he aided in the defenses of the world against the forces of Chaos. He was eventually joined into a reluctant alliance with the Necron Lord Trazyn the Infinite and the duo joined together to activate Cadia's Pylon array. While initially successful in activating the Pylons, Cadia was shattered by Abaddon's redirection of the remains of a Blackstone Fortress into the planet. Cawl fled the Cadian system with his artifact and several allies including Saint Celestine, Inquisitor Greyfax, and Marshal Marius Amalrich. Hounded by the Black Legion who sought his artifact of still unknown significance, Cawl and his allies were eventually guided into the Webway on Kalisus by his saviors: Eldar under Eldrad Ulthran.[2]

The Eldar guided the expedition to Macragge where Cawl revealed that his precocious artifacts were the Emperor's Sword and a suit of Power Armour that could heal the comatose Primarch Guilliman. During the Ultramar Campaign Cawl was able to successfully work with the Eldar in resurrecting Guilliman, who drove the Chaos invaders from Ultramar. Cawl accompanied Guilliman in the subsequent Terran Crusade and was one of the few to reach Terra. Once on Terra Cawl talked with Guilliman of a secret pact with Mars and of his work nearing completion. He then made his way to the Red Planet to oversee its success.[3]

This secret project was Cawl was revealed to be the creation of Primaris Space Marines, the next generation of the Angels of Death. In truth, Cawl had been working on the project for 10,000 years.[4] Despite his seeming loyalty and effectiveness, Guilliman still harbors a great amount of distrust for Cawl. He believes Cawl to border the heretekal, particularly with regard to his creation of an artificial intelligence known as the Cawl Inferior. Due to this, Guilliman has repeatedly refused Cawl's requests to become Fabricator-General. Cawl's actions have also made him enemies with many across the greater Mechanicum, particularly the more religious and conservative Tech-Priests.[5]

During the Age of the Dark Imperium, Cawl traveled with the rebuilt Scythes of the Emperor to Sotha to study the reactivated Pharos and use it to learn of Blackstone deposits across the Galaxy.[9b] During the experiments the C'tan held within the device, Zarhulash, agreed to work with Cawl to remove the heart of the Pharos in exchange for being set free. Cawl agreed, but tricked the C'tan by destroying the Pharos and teleporting Zarhulash to the far side of the galaxy.[9a]

Cawl's humanity has long since been stripped away. He maintains different "files" of personalities, which he accesses depending on the situation. By the end of the Indomitus Crusade, Cawl had artificially replicated his own sentience to the point where he could no longer said to be a single individual. Cawl kept each "Sub-Cawl" limited to prevent the core intelligence from being threatened. Aboard his Ark Mechanicus Zar-Quaesitor dozens of sub-cawls swarm about, each undertaking a different task.[7]

Cawl has a number of other creations used to aid him, such as Alpha Primus and Qvo.[9c] 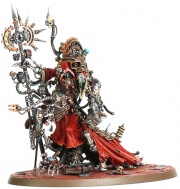