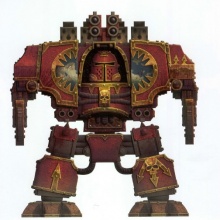 Berserker Dreadnoughts are a type of Chaos Dreadnought used by Chaos Space Marine followers of Khorne.[1]

These infernal machines first appeared among the Contemptor Dreadnoughts of the World Eaters Legion during the Horus Heresy. These dreadnoughts were optimised for close combat assaults and as line breakers, modified from standard patterns to be larger and swifter than their more common counterparts. They were frequently used in near suicidal charges into the heart of an enemy line. Their use by the World Eaters may have even pre-dated the Heresy, further contributing to their savage reputation.[1]