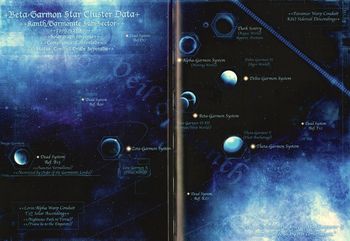 At some point after the Heresy, it seems as if the Beta-Garmon Cluster became lost to the Emperor. In 679.M36 the Rogue TraderKhorlu rediscovered the fabled Beta-Garmon System. With the aid of the Silver Skulls, the Imperium reconquered the region. As a reward for helping him secure the System, Khorlu later ceded them the planet Beta-Garmon IV, considered the jewel of this System.[8]