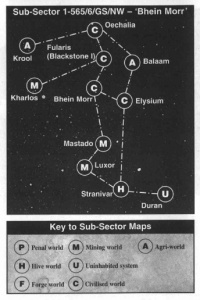 Map of the Bhein Morr Subsector

The Bhein Morr sub-sector is an Imperial sub-sector located in the Gothic Sector of Segmentum Obscurus. Battles were fought here during the 12th Black Crusade.

The Gethsemane sub-sector is located within the Gothic Sector, an Imperial sector of Segmentum Obscurus. Prior to the start of the 12th Black Crusade, also known as the Gothic War, the Blackstone Fortress designated Blackstone I was located in the sub-sector, in the Fularis system.[1a] In orbit around the mining world of Luxor is an independent space station under contract from the rulers of Port Maw, making it an exception to the usual hegemony of the Imperial Navy and Adeptus Mechanicus in controlling such structures.[1d]

During the Gothic War, rumours circulated among the Imperial Navy that the sub-sector was the lair of some vast Warp-spawned predator. Seventeen independently-operating vessels disappeared in the region throughout the conflict, over twice as many as any other sub-sector during this time. One ship, the Aristotle, which had arrived in the Gothic Sector from the Thrace Sector, survived an attack by the creature, though its crew would later give hugely varied descriptions of its appearance.[1c]

By 144.M41, Ezekyle Abaddon had captured two of the Blackstone Fortresses during the Gothic War; his attention then turned to Blackstone I.[1b] Although the Imperial forces were forewarned of Abaddon's approach, their defences proved useless against the might of his two Blackstones, and the Despoiler personally led the assault on Blackstone I.[2] The world of Fularis II bore the brunt of the Chaos attack, Abaddon's Blackstones linking together to unleash a concentrated beam of energy upon the planet. Fularis II was later found with its atmosphere lost and its surface scoured bare.[1b]