Biel-Tan is an Eldar Craftworld, famous for its extreme militarism. 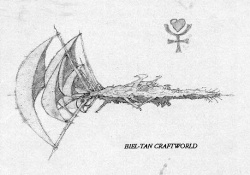 The Biel-tan Craftworld is famous for its inhabitants' militancy; it is home to more Aspect Warriors than any other craftworld.[2a]

The Eldar of Biel-tan are honourable warriors who have taken it upon themselves to rebuild the lost glory of the ancient Eldar empire, through the destruction of the lesser races who have "usurped" the galaxy, and believe it is glorious to die fighting the enemies of the Craftworld. At the centre of Biel-tan is the Chamber of Heroes where the spirit stones of dead Aspect Warriors are placed. Farseers often come to this room to consult the dead on courses of action.[Needs Citation]

As well as their traditional colours of green and white, the forces of Biel-Tan sport patterns of dark thorny ivy.[2c]

When the Eldar of Biel-Tan go to war they assemble a warhost known as the Bahzhakhain, which means "Swordwind", "Tempest of Blades"[2a] or Frozen Leaves Falling to Cut.[10] The Swordwind's tactic is a single, swift strike taking the enemy by surprise.[2a] This tactic works considerably well with the elite fighting skills of the many Aspect Warriors eliminating the enemy before they can respond. The Biel-Tan therefore make perfect use of the speed and maneuverability of the Wave Serpents and Falcon Grav Tanks.[Needs Citation]

The main target of the Biel-Tan are non-Eldar colonists, particularly non-Eldar occupying Eldar Maiden Worlds. It is especially galling to the Eldar who created these paradise worlds from dead worlds to find them overrun with inferior species. The Eldar of Biel-tan believe the success of other alien races is a threat to the future progression of the Eldar empire. For this reason, the Biel-Tan particularly hate the Orks, Orks being a completely expansionist race, whose occupation of a world quickly becomes permanent. In many cases, Biel-Tan have helped Imperial forces that were under heavy attack by Orks and to hunt down Ork Roks before the tide of Orks can overrun a planet.

The Swordwind even possess a vehicle that is unique to Biel-Tan. It is a super heavy grav tank called a Void Spinner, which is armed solely with a huge monofilament cannon that works just like any other monofilament weapon except that it incorporates a techno virus that sterilizes the ground that it touches. This makes it extremely useful against the Orks due to the Ork's spore-based method of reproduction, preventing further re-infestation.[Needs Citation]

The symbolic rune of Biel-Tan stands for reincarnation, a fate previously thought reserved for every Eldar before the Fall. The rune roughly translates as Rebirth of Ancient Days, reflecting the intention of the Craftworld to see their former empire restored.[2a][5] 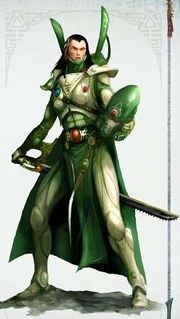 During the closing days of the 41st Millennium, Biel-Tan became the center of the future of the Eldar race. A Biel-Tan native, Yvraine, became an emissary of Ynnead and introduced a plan to birth the God without the need to sacrifice the entirety of the Eldar. However, at the same time, Biel-Tan was subjected to a Daemonic invasion led by Skarbrand and The Masque. Biel-Tan allied with the Ynnari and Phoenix Lords to close the Webway Portal to the Craftworld on Ursulia. The effort was successful, but large numbers of Daemons managed to infiltrate Biel-Tan before the portal was sealed. Worse still, The Masque was able to invade Biel-Tan's Infinity Circuit and began destroying the souls within.[7]

Yvraine revealed that in order to resurrect Ynnead and purge The Masque from Biel-Tan she required an Avatar of the God as well as the Crone Swords. In order to give birth to Yncarne, Yvraine conducted a ritual in Biel-Tan's Infinity Circuit that cost countless Eldar souls. However, while devastated, Biel-Tan endured and remains united on the path to resurrect Ynnead[7]. In the aftermath of the Battle of Biel-tan, its population has been halved with many falling to the Daemons' attack and others choosing to join the ranks of the Ynnari[9]. Those that have remained with the Craftworld now reside on its fleet of ships[8a], while its Bonesingers work tirelessly to keep the world-ship together. These Eldar cling to their orthodox methods, vowing with renewed vigour to destroy all would-be usurpers to their race and bring about a new Aeldari civilisation to rival the ancient empire of old. Biel-Tan's ghost halls have also swelled with newly animated wraith-constructs, bearing the souls of those the infinity circuit can no longer protect[9]. Yet another development is that the surviving members of Biel-Tan's Swordwind have vanished into the Webway. From there, the Swordwind have resolved to maintain the warlike traditions of their Craftworld, and continue to scour ancient Eldar worlds of Xenos usurpers.[8b]

Between the wars against Chaos and those departing to join the Ynnari, Biel-tan has lost half of its former population. To replenish their numbers, they have become increasingly dependent on Wraith Constructs. The hardships has left those who remain within Biel-tan more fanatic than ever.[14]

Since the Battle of Khazhar, Biel-Tan has become aided by a great many Exodite warriors.[11a] 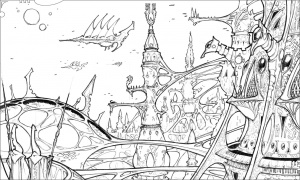