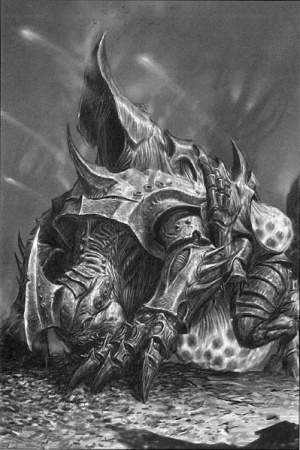 Biovores are Tyranid creatures who are bred to launch Spore Mines towards the enemy. Along with Pyrovores, they are the Tyranid equivalent of other species' artillery.

Biovores are sluggish, bloated creatures whose only task is to grow and launch Spore Mines towards the enemy.[1]

Spore Mines grow deep inside a Biovore's body, and are then launched via a powerful muscle spasm through the Biovore's dorsal aperture and hurled across the battlefield. An internal gas bladder in the Spore Mines inflates, allowing them to drift down towards the ground, where they do not detonate upon impact but when they sense the proximity of a non-Tyranid lifeform.[1] A Biovore can fire three types of Spore Mines: fragmentation, bio-acid or poison.

Biovores are relatively rare amongst the Tyranid horde, as the Hive Mind prefers combat that involves a bloody melee. However, as the Tyranid invasion pressed deeper into the Galaxy, Biovores were created by the Hive Mind as a means to neutralise the long range weaponry used by its enemies.[1] Biovores supposedly contain genes assimilated from Orks.[3]