A Black Crusade is an incursion that is formed when the usually disparate forces of Chaos unite under a particularly strong Chaos Champion and go forth en masse to wage war against the Imperium of Man.[1]

Following the devastating events of the Horus Heresy, the Imperium began the Great Scouring, a campaign to cast out all traitors who had sided with Chaos and drove them into the warp storm known as the Eye of Terror. There, the followers of Chaos began to fight among each other for domination and territory and their vast armies eventually fractured.[1]

Even so, the threat the exiles posed was far from gone. To this day they seek to overthrow the Imperium, launching separate raids and invasions against it. Once or twice within a millennium however, an exceptional Chaos Champion rises who is strong enough to bring his fellow warlords and their hosts under his sway. When this happens ancient rivalries are set aside and uneasy alliances are forged, clearing the way for what is called a Black Crusade.[2] [4] [5]

The forces and fleets that gather for a Black Crusade are made up of all types of Chaos servants: the multitudinous hordes of the Lost and the Damned, ancient and towering Chaos Titans, the bizarre war machines of the Dark Mechanicum and the Daemons of the warp. Leading them into the realm of man are the vengeful warbands of the Chaos Space Marines.[4] [5]

When the crusade is launched, whole worlds fall prey to the rampaging hordes and the Dark Gods themselves divert their attention to the material realm, delighting in the sacrifices made in their names. Still, the nature of Chaos is fickle and unless it is repelled by the defenders, the crusade is bound to splinter into separate hosts and warbands who pursue their own ambitions.[5]

The Black Crusades of Abaddon the Despoiler 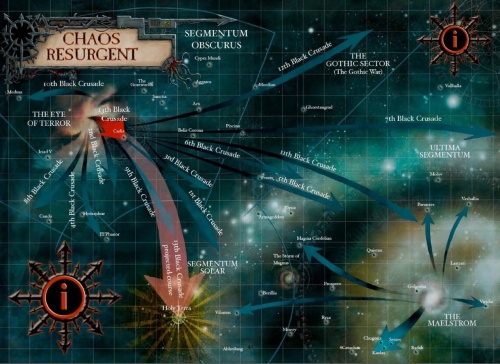 Paths of the first twelve Black Crusades. The 13th Black Crusade was a massive invasion of the sectors surrounding the Cadian Gate[Needs Citation]

The most infamous Black Crusades are those led by Abaddon the Despoiler, Warmaster of the Black Legion and successor to Horus. So far, he has led thirteen such attacks, which ranged from small raids to battles that spanned entire sectors.[2] His latest Black Crusade, the Thirteenth, has succeeded in destroying Cadia.[Needs Citation]

The Black Crusaders of Abaddon have a secret and even more sinister purpose. Throughout the Millennia he has identified ancient monoliths holding back the tides of the Warp. Using his Black Crusades to sometimes conceal his true objective, Abaddon has targeted and destroyed many of these structures as part of a plan known as the Crimson Path. The ultimate objective of Abaddon's Black Crusades is to expand the Eye of Terror to envelop Terra itself.[13]