The Black Dragons were long rumored to be a Salamanders Successor Chapter,[5a] which has only recently been confirmed to be true.[15] It was founded in the cursed 21st Founding, just prior to the Age of Apostasy.[1] 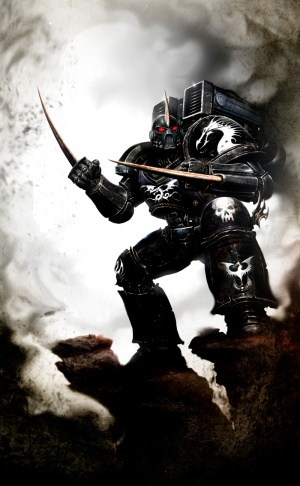 The Black Dragons are chiefly known for their status as a Cursed Founding chapter, and for their uniquely peculiar gene-seed mutation; their Ossmodula zygote has mutated, producing bony crests on their heads and blades from the forearm and elbow. Similar to the Death Company of the Blood Angels, those with these abnormalities join a separate unit, known as the Dragon Claws. In this unit, they sharpen their protrusions to a killing edge and coat them with adamantium to turn them into horrible Close Combat Weapons.[1][5] These forearm blades can be retracted into the Claw's arm, then extended at will. The most extreme mutations also cause rampant growth in the rest of the Marine's skeleton; some Dragon Claws stand more than three metres tall and must wear custom power armour to fit their gargantuan frames.[3a]

There are many in the Inquisition who doubt their loyalty and several other chapters refuse to fight alongside them, including the Dark Angels and Marines Malevolent. [1]

It is rumored that the Black Dragon Apothecaries deliberately encourage these growths, wishing to create more of the valued Dragon Claws. This is a very dangerous practice and such gene-manipulation away from the genic template of a Space Marine is forbidden in the Imperium. When the usual 5% tithe of gene-seed is requested, the Black Dragons often resist giving it over, and sometimes have needed to be threatened with military action in order to comply with the tithe request. When they do send it in, the veracity of the gene-seed is unknown, as each passes the most stringent tests; some therefore believe that that it is not even the gene-seed of the Black Dragons. How this is procured is a mystery, although the Adeptus Mechanicus and some ordos of the Inquisition are eager to investigate the medical practices of the Cursed Founding chapter.[1][3a]

Only the turmoil formed by the Great Rift's formation has halted the latest Inquisition investigation into the Black Dragons.[12]

During the Indomitus Crusade, a Torchbearer Fleet commanded by Custodian Alenxandrios Menza delivered the technology necessary to create Primaris Space Marines and a squad of Black Dragons Greyshields, injected with the chapter's Geneseed, to the fifth company, which were accepted by chaplain Darrig.[16]

While they are frowned upon and often investigated for traces of heresy, the Marines of the Black Dragons proudly bear their mutations and use them efficiently in battle. Most of their culture turns around bones and honour. Their Chaplain sits next to The High Dragon on thrones made from bones and sculpted to the likeness of their Chapter Symbol. Being implanted with the gene-seed of the Black Dragons isn’t enough to be one of them, the Rites of Bone, Rites of Fire and Rites of Claw seem to be essential to be called a battle-brother amongst the mutated Marines. Even those who do not have the mutations from the curse of their gene-seed fashion their armours in a way that resembles the bone growths their brother have.[16]

Notable Elements of the Black Dragons

Known Members of the Black Dragons 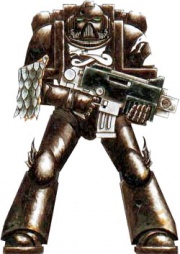