The Black Legion is the current largest warband of Chaos Space Marines. Formed after the defeat of the Sons of Horus in the Horus Heresy, the Legion was founded by former Sons of Horus First Captain Ezekyle Abaddon near the conclusion of the Legion Wars. It includes a substantial portion of the former Sons of Horus[1] alongside Traitor Astartes from all walks of life.[20] The Black Legion sees itself not as the successor of Horus and his Legion, but as a new army to continue the Long War and succeed where he failed.[35b]

The Black Legion can be found operating in countless small warbands across the galaxy, except when they are called together under Abaddon's banner to spearhead one of his notorious Black Crusades.[1]

The Black Legion origins lay with the XVI Legion and following the First Pacification of Luna, the Luna Wolves. They were the legion of Warmaster Horus himself, said to be the most favored of the Emperor's sons. In honour of Horus's great achievements during the Great Crusade, the Emperor decreed that the legion should be renamed the Sons of Horus. However, Horus was later corrupted by Chaos and rebelled against the Emperor, instigating the devastating Horus Heresy. At the Siege of Terra, Horus was slain by the Emperor and his rebellion defeated.[1]

The Black Legion symbol, derived from the Eye of Horus[27]

Horus's death broke the Sons of Horus's morale, and they were the first of the Traitor Legions to retreat from Terra, an act that would earn them the hatred of all the other Traitor Legions. The Legion re-grouped on the world of Maeleum inside the Eye of Terror. There they built a fortress-tomb for the safe-keeping of the Warmaster's corpse and even in death still revered him as their commander. Nobody was appointed in his place and the Captains of the Legion would offer sacrifices and pray for guidance in his shrine.[1]

The Sons of Horus were initially the most aggressive Legion against the Imperium, as if to atone for their previous cowardice on Terra or perhaps to attempt to 're-prove' that they were still the best Legion. The Sons dedicated themselves not to one single Chaos Power but constantly shifted their allegiance to whatever god suited them at the time. Marines willingly became possessed by the Chaos Gods' daemons; with every change in loyalty, the daemons of the rejected god abandoned the hosts, leaving them lifeless husks. The once great Legion constantly dwindled in number, until they neared extinction. Eventually the desperate experimentation and research by the Legion's Sorcerer-Librarians uncovered a method of possession that did not destroy the mortal host, saving the Legion.[1]

The Traitor Legions, along with the restored but still numerically inferior Sons of Horus, then became embroiled in a series of internecine wars triggered by the Emperor's Children legion, culminating in the destruction of the Sons of Horus' fortress on Maleum. To the disgust of the Sons of Horus, the Warmaster's corpse was taken by the Emperor's Children and several clones were created by their self-styled 'Primogenitor', Fabius Bile.[1]

It was at this point that the old Sons of Horus Justaerin Captain Falkus Kibre was able to track down the Vengeful Spirit and Abaddon deep inside the Eye of Terror. Abaddon revealed his intent to destroy the clone of Horus and reform the Sons of Horus into a Legion to finish the war Horus had begun. After smashing the Emperor's Children fortress and killing the clone of Horus, Abaddon declared himself the rightful successor of the Warmaster. Painting their armor black, Abaddon renamed his forces the Black Legion, rejecting Horus' name and all the failure that went with it.[27] Abaddon managed to reunify the bulk of the old Sons of Horus under his banner, crushing all who resisted. The founders and inner circle of his newly formed Black Legion became known as the Ezekarion. The newly christened Black Legion faced its first serious threat in the form of the Death Guard warlord Thagus Daravek, who was a chief rival to Abaddon in his rise to power and another potential Warmaster of Chaos.[35] However, Daravek was eventually defeated, and Abaddon's power grew exponentially as he gathered many allies across the Eye of Terror, most of the Daemon Primarchs included. Using Chaos rather than being enslaved by it, Abaddon has waged the Long War on the Imperium ever since, most notably during his thirteen Black Crusades.[20] 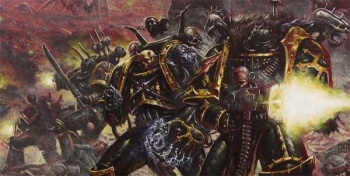 Since their formation, the Black Legion has engaged in thirteen infamous Black Crusades against the Imperium. While seemingly just major attacks from the Eye of Terror, the Black Crusaders of Abaddon have a secret and even more sinister purpose. Throughout the Millennia he has identified ancient monoliths holding back the tides of the Warp. Using his Black Crusades to sometimes conceal his true objective, Abaddon has targeted and destroyed many of these structures as part of a plan known as the Crimson Path. The ultimate objective of Abaddon's Black Crusades is to expand the Eye of Terror to envelop Terra itself.[50]

At the culmination of the 13th Black Crusade Abaddon succeeded in destroying Cadia. This set off a chain reaction that allowed for the formation of the Great Rift, effectively dividing the Imperium in half between Imperium Sanctus and Imperium Nihilus.[51] Abaddon now seeks to further isolate the Imperium with his Invasion of Vigilus[52] and through his attempts to use Blackstone to cut off Imperial Warp Routes.[53] Months later, Abaddon entered into an alliance with the Daemon Vashtorr to find the fragments of a mysterious weapon known as The Key, beginning the Arks of Omen Campaign.[87]

The Black Legion at War[67]

The Black Legion consists of a large portion of former Luna Wolves Gene-seed alongside those from absorbed warbands or captured from the Imperium.[20] Though the Luna Wolves Gene-Seed was historically considered reliably pure, the regular practice of seeking Daemonic possession has accelerated its mutation. However, such mutations in the reborn Legion are seen as a mark of favour from the Gods of Chaos and are generally displayed with pride.[1]

The defeat and exile of the Traitor Astartes was a crushing blow to the collective ego of Abaddon and his initial followers, and they broke down and fragmented easily without a purpose or powerful leader to act as the point of their spear. These elements suffered significantly during the early years of exile when it was leaderless, though since Abaddon's leadership it has regained a sense of discipline and purpose. Horus' favoured doctrine of 'tearing the throat out of the enemy' by eliminating their high command in a swift strike remains a well-used tactic.[1]

All Black Legion leaders, from the remaining veterans of the Horus Heresy, to the more recently raised, are both cunning and ferocious. The Legion's tactics have been shaped by its lack of numerical strength compared to other Legions, and commanders are adept at using their troops to the best effect[1].

After the death of Horus, proper structure within the squads and companies disintegrated, and their later dispersal in various spacecraft further fragmented the Legion. Warbands of virtually any size and composition can be found following Black Legion Champions - ranking officers from older times or newly emerged leaders who have won favour through their violent deeds. At times, such warbands rally together under the banner of a greater Champion or even Abaddon himself, for a major raid or incursion into the hated Imperium. However, loyalty to differing Chaos Gods often leads to internal politics and conflict. Possession by daemons is still considered highly favourable, and many members of the Legion strive for the honour of being hosts.[1] 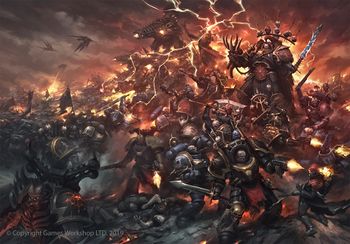 The Black Legion battles on Vigilus[52a]

Two known leadership structures exist within the Black Legion. These are the Ezekarion, which are Abaddon's closest lieutenants and comrades[27] and the Chosen of Abaddon, which are his four greatest military commanders.[2x]

Though the Black Legion is the largest and most organized of the Traitor Legions, it still operates a number of warbands that work in isolation and pursue their own agendas until they are called upon by their master. Others like the Thrice-Cursed Traitors may try to challenge Abaddon's authority.[20]

Once considered a large legion, the Black Legion were long considered numerically inferior to other Chaos Space Marine legions since the inter-Legionary wars.[1] While the number of original Legionaries remaining is unknown, and it is unknown how or even if the Black Legion recruit new implantation candidates, it is known that they recruit Marines from other Legions and renegade Chapters.[8x]

In spite of these difficulties, by M41 the Black Legion was the largest of the Traitor Legions, having ten times the numbers of the Word Bearers.[11] This is aided by their policy of absorbing other Chaos Space Marines and their warbands into their own ranks, regardless of which God of Chaos they may follow, if any.[20]

At the time of the 13th Black Crusade, the fleet of the Black Legion had grown enormously, comparable to Imperial Navy Battlefleets in size. These included seven Battleships, thirteen Heavy Cruisers, twenty-three Cruiser squadrons, and thirty Escort squadrons.[14] The Black Legion fleet is also in possession of a number of superweapons, such as the Planet Killer and multiple Blackstone Fortresses. The flagship of the Black Legion's fleet and of Abaddon himself remains the Battle Barge Vengeful Spirit.[8a]

Noted Elements of the Black Legion 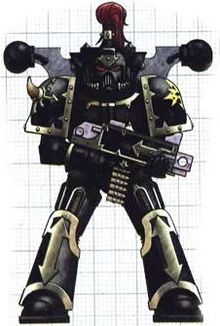 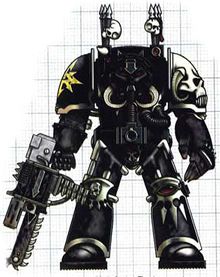 While there exists countless Chaos cults all over the Galaxy, some of them associate themselves with a certain Chaos Space Marine Legion.