During Horus's attack on the Imperial Palace, the Imperial Fists' primarch, Rogal Dorn chose his First Captain, Sigismund, as the Emperor's Champion; he was given the best armour and weapon and swore a holy duty to challenge the Champions of Chaos, and triumphed over all he met in battle.[1]

Aftermath of the Heresy

After the Horus Heresy, Roboute Guilliman, the primarch of the Ultramarines, ordered the breakdown of the Space Marine Legions into chapters. Dorn thought Guilliman a coward for not being there during the defence of Terra. Guilliman, in turn, thought Dorn a rebel for refusing to accept the dictates of the new Codex Astartes. Neither would give in. Leman Russ of the Space Wolves and Vulkan of the Salamanders both sided with Dorn, as they did not want their Legions divided, while Corax of the Raven Guard and Jaghatai Khan of the White Scars sided with Guilliman. Again, civil war threatened to split the Imperium.[1]

Creation of the Black Templars

Sigismund led the more zealous of the Imperial Fists with him to the founding of the Black Templars, and became their first High Marshal. Sigismund swore an oath upon leaving Terra, that he and his new chapter would prove their loyalty by never resting in his duties against enemies of the Emperor. Sigismund spent much of this time remaining vigilant over the Cadian Gate, insisting that Horus' Traitors would one day return to plague the Imperium. Despite the dismissals of many Imperial officials, Sigismund was proven right when Abaddon returned in the First Black Crusade. The Black Templar fleet was waiting, and a massive battle erupted that saw Sigismund slain by Abaddon himself.[32]

Since his death, every High Marshal has renewed Sigismund's oath of never-ending crusade and as such, the Black Templars' Crusade has continued for over ten thousand years.

In 998.M41, the Black Templars would briefly come to blows with the Dark Angels, after the Templars refused to hand over a prisoner that the Dark Angels suspected to be Cypher. The incident is reported to the Adeptus Terra, and Inquisitor Archibald was assigned to lead the inquiry.[10]

Age of the Dark Imperium

The Black Templars found themselves spread across the Galaxy when the Great Rift opened. By the end of the Noctis Aeterna, several Crusades were discovered to have vanished altogether while even those within the Imperium Sanctus found themselves scattered. Rather than using the reactivation of the Astronomican as a reprieve to consolidate and recoperate, the Black Templars instead undertook a vicious purge against the new wave of mutation and heresy within the Imperium Sanctus left in the wake of the Noctis Aeterna. Other Crusades redoubled their efforts against the enemies of Mankind, and new Chapter Keeps were raised.[5f]

It was during this time that Roboute Guilliman's Torchbearer Fleets discovered the Black Templars and delivered the Primaris Space Marines to them. Many thought that the fanatical Black Templars would reject the newcomers, and fearing conflict Guilliman himself met High Marshal Helbrecht aboard the Eternal Crusader. The High Marshal was in the midst of pursuing the Ork Warboss Ghazghkull, and was impatient to conduct diplomatic matters. In the ensuing meeting Guilliman was surprised by the willingness of Helbrecht to recognize the value of the Primaris line, while Guilliman did not turn out to be the commanding despot that the High Marshal expected. Guilliman gave Helbrecht the choice of accepting Primaris Space Marines and reminded the High Marshal that he was responsible to the whole of Mankind's realm as opposed to his own personal vendettas with the Orks. In the end, Helbrecht accepted the Primaris into his ranks and promoted a number of his own Sword Brethren to Marshals in order to command new Crusades made up of former Greyshields. Helbrecht's acceptance of the Primaris Space Marines helped convince the various Crusade Fleets to also incorporate these new warriors into their ranks.[5f] However the incorporation of Primaris Space Marines did not go entirely smoothly for the Chapter, most infamously in the Angevin Crusade[56b]

There has been some talk that Black Templars are especially resilient in crossing the Rubicon Primaris, and that it made be a reward for their faith in the Emperor. It is unknown if this is verified fact or simply a rumour.[5f] 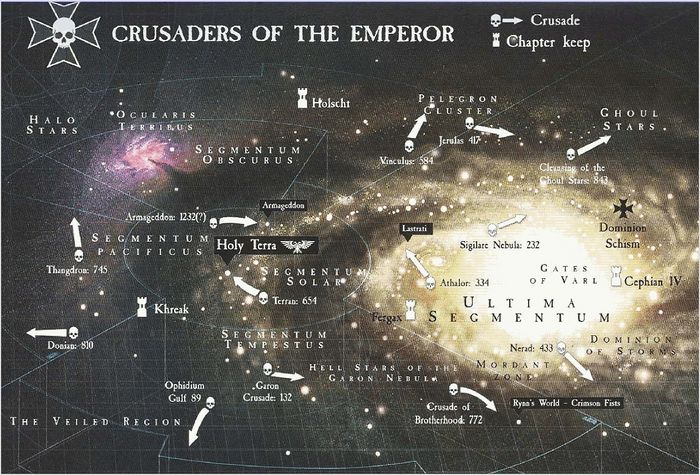 Notable Crusades of the Black Templars 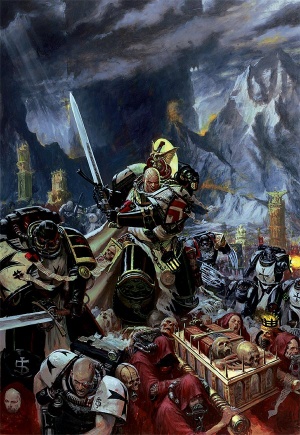 The Black Templars are among one of the rarer Chapters that worship the Emperor of Mankind as a god and follow the Imperial Creed.[23a][39b]

By their doctrine, the Black Templars abhor the traitor, the alien and the mutant. The last category includes psykers, but Black Templars do use psykers in other non-combatant roles, such as Astropaths and Navigators.[1] Black Templars view these beings with special reverence as they see them as able to commune directly with the Emperor.[19] The Black Templars are also one of the few Chapters to not utilize Librarians since the psychic catastrophe known as The Howling[39e]

Black Templars place great emphasis on close combat prowess and honour. As such they can often be seen charging into suicidal situations to avenge fallen comrades. Black Templar Marines also set themselves apart from standard Codex doctrine by including Neophytes into squads of fully initiated Marines to help teach them the ways of battle and the art of combat.[1]

The Black Templars are also notorious for defying Codex doctrine that states that a chapter may only number 1000 battle brothers. This is partly due to the divided nature of the chapter, being spread out everywhere on separate crusades (usually consisting of several hundred Battle-Brothers[21]) and no one has thus been able to keep track of their exact numbers. However, it has been estimated that there may be several thousand Black Templars Companies spread out around the galaxy - an almost unstoppable force if gathered at one place and cause for the Inquisition to keep a close eye on the Black Templars.[1]

Vows of the Black Templars[1c]

The Black Templars have continued in the style of their first High Marshal, preferring close combat over ranged warfare. This is further emphasised by the fanaticism of Black Templars Initiates, whose righteous anger makes them impulsive and headstrong.[1]

When making war, the Crusade will focus on two main tactics. The first is orbital assault; where the Crusade will use drop pods and Thunderhawks to perform a mass-landing in the wake of a heavy orbital bombardment. If resistance is still strong after this, the Templars will land their heavy armour and launch an armoured spearhead against the weakest link in the enemy's defensive line, using Crusader-pattern Land Raiders.[1]

As part of their dedication to the Emperor and their Crusade, the Black Templars swear fell oaths of faith and protection. Before a battle, it is considered customary to renew one of these oaths, the particular vow serving as a focus on the particular aspect of their duties considered to be necessary to ensure success.[1] 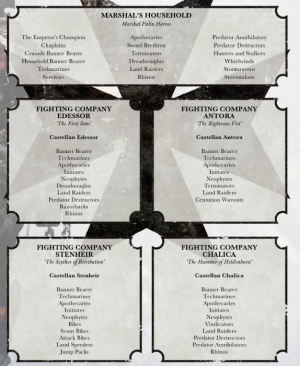 Organization of a typical Black Templar Crusade, in this case the Arkron Crusade

The Black Templars are not organised like a typical Codex Chapter. They give mere lip service to Roboute Guilliman's Codex Astartes, instead operating many roaming Crusades Fleets that battle the enemies of mankind across the Galaxy. The exact size of the Chapter is unknown save only to the High Marshal himself. There is little doubt however that the Black Templars are far larger than a standard Codex Chapter.[5d]

These Crusades are in turn typically broken down into Fighting Companies, which may number from a few dozen to a hundred Space Marines, as well as their vehicles and support.[5d]

Crusader Squads are made up of raw recruit Neophytes, rank-and-file Initiates, and elite Sword Brethren. These squads often form strong bonds and it is not uncommon for Black Templars to remain in them even upon becoming veterans. Initiates will sometime spend decades or even centuries in their role, whereas Battle-Brothers in conventional chapters tend to progress through the ranks steadily. However the Black Templars see Initiates as walking their own path, and only he and the Emperor may determine how he wields his skills in defense of Mankind. However as the years pass, most Initiates develop new skills and specialities, often taking on more specialized roles such as Assault Marines, Incursors, Aggressors, and so on. Others chose to ride and pilot vehicles or dawn Invictor Warsuits.[5d]

After especially notable victories or harrowing trials, Initiates are often given battle-honours, relics, and other such awards. Eventually, they will obtain the rank of Veteran, which is bestowed independently by a Chaplain or Castellan, or even a fellow Veteran. Veterans are excused of training of Neophytes and will often be deployed in specialized Veteran formations such as Bladeguard, Sternguard, Terminators, Veteran Intercessors, and so on.[5d]

There exists another elite rank within the Black Templars, that of Sword Brethren. These are their Marshals household and are given such rank due to their exceptional deeds and status.

Meanwhile specialists such as Chaplains, Techmarines, and Apothecaries are organized centrally and dispatched to various Crusade Fleets as needed.[5d]

Unlike many other chapters, the Black Templars do not have a homeworld. Eschewing the idea of one, they opt to live aboard their crusade fleets. These vary in size and are made up of dozens of Battle Barges, Strike Cruisers and other craft such as training vessels and huge forge ships.

Given this fleet-based nature, the Black Templars are rarely assembled as a Chapter, but are instead divided into many Crusades, every Crusade being responsible for its own recruiting as well as training of new Neophytes.[39c]

This flexible, mobile nature allows the Templars to continue the first mission of the Black Templars: to actively seek out the enemies of the Emperor and destroy them before moving onwards to find the next foe.

The exact number of Crusade fleets active at any one time, as well as the size of the individual fleets, varies according to the Chapter's needs and abilities.[39c][39d] The exact size of Crusade Fleets varies, with some numbering a handful of warriors while others may even number thousands. However the typical size of a Crusade Fleet is between 50 and 300 warriors.[5d]

The High Marshal himself has his own personal Battle Barge, the Eternal Crusader, a huge vessel that is the spiritual home of the entire Chapter and contains its most sacred relics, chapels, and reliquaries. It has been expanded and refitted many times and can currently hold twice as many Space Marines as a normal battle barge.[Needs Citation]

Many Imperial Citizens want to become a Black Templar, so they hone their skills which helps them later to enter the ranks of the Imperial Guard or planetary defence force even if they are not chosen to be Neophytes. Those who declare their intent to join Black Templars are known as Expectanten and have a long and dangerous journey to survive before they can became a simple Neophyte.[27]

When a Crusade Fleet conquerors a world, the Black Templars often raise a Chapter Keep upon it to maintain their vigil. Though smaller than the Fortress-Monastery of a Codex Chapter, these are nonetheless formidable bastions that can house 200-300 Space Marines as well as support personnel and Servitors, though few rarely garrison numbers this large. As Chapter Keeps are often raised on worlds ravaged by war, they are usually home to a violent and brutal population and are seen as prime recruitment material.[5d]

The following planets are known to host Black Templars keeps: 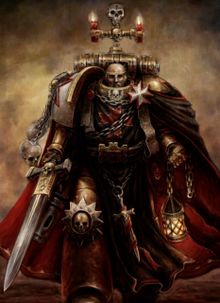 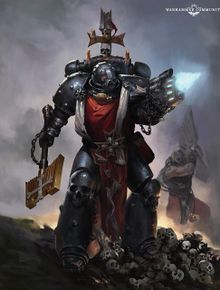