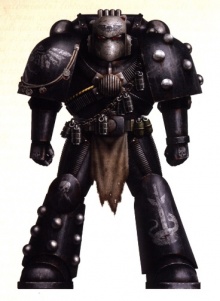 A Blackshield of the Dark Brotherhood

The term Blackshields refers to irregular Space Marine units during the Horus Heresy. Small in scale, few numbered more than a thousand or so warriors.[1b]

Evoking martial tradition of ancient times, a Blackshield was a warrior who had entirely denounced his parent Legion, or in some extreme cases had never known from which Legion they originated. They often fought under a false banner or bore no banner at all. Groups of Blackshields fought against both sides in the Heresy, dating back to the Battle of the Coronid Deeps of 006-008.M31. There, a force of loyalist Astartes clad in black and wearing no iconography other than the Aquila formed to fight the traitors, but refused the order to withdraw and were presumed lost.[1b]

The exact origins of the Blackshields phenomenon remains a mystery. However, what is known is that many types of Blackshields existed, most defined by the circumstances of their formation. Some were Astartes driven beyond their limits, consumed by the grief and insanity of the Heresy. Some were so broken in mind and spirit they no longer recognized or acknowledged any lord, becoming determined to forge their own path in the Galaxy. Others were mere raiders determined to claiming their own domains from both sides. Some thought they were still continuing the work of the Great Crusade while others established petty empires, enslaving those they came across. Perhaps the most mythic type of Blackshields were those who actively turned on their own Primarch and Legion.[1b]

However, one of the few defining factors common across Blackshields was the fact they all denounced their heritage and none considered themselves belonging to any Primarch. This led to most, though not all, painting themselves in a distinctive black. As with Shattered Legions forces, Blackshields were encountered on both sides of the war and in many cases were fighting entirely for themselves. Some bore the Aquila while others bore the Eye of Horus, but none answered to any master except themselves. The Imperium considered many of these bands to be little more than Pirates.[1b]

In battle, Blackshields were observed using "Pariah" Wargear, modifying their armour and weapons in ways that would have been considered illegal in the Legiones Astartes. They were also observed using Xenos weaponry.[1a]