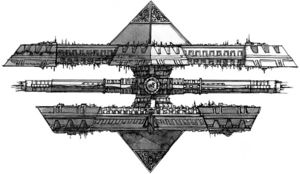 Blackstone Fortresses are massive starships of unknown origin, first used by the Imperium as a naval base, then used by the forces of Chaos as a weapon of mass-destruction.

The Blackstone Fortresses were remotely controlled by Abaddon the Despoiler with the alien artifacts Hand of Darkness and Eye of Night. Once fully activated, a Blackstone Fortress is capable of breaking the barrier between realspace and warpspace, creating a beam of pure immaterium to destroy everything in its path. This power can be linked with other Fortresses to create an even more powerful beam, as was evident when Abaddon used two Fortresses to destroy the planet Fularis II, and three to cause the Tarantis star to go supernova.[1b]

Abaddon the Despoiler first learned of the Fortresses sometime in M40, where he was guided by the visions of Zaraphiston to an Eldar Crone World. There, he read an ancient prophecy revealing their existence.[6]

Six Blackstone Fortresses were discovered by the Imperium in the Gothic Sector around early M33. Initial studies dated the Fortresses between 17,000 and 300,000 years old, however their exact construction process is unknown. Most of the Fortresses' systems were offline aside from the main power systems. The Adeptus Mechanicus retrofitted their own weapons (the weapons batteries they were given far surpassed the firepower of any ship in the Imperium) and life-support systems to the main power grid, as well as a number of hangars for smaller craft, turning each Fortress into a primary naval base for Battlefleet Gothic.[1b]

The Gothic War was Abaddon's Black Crusade to capture and activate the six Blackstone Fortresses. He succeeded in taking three, but was defeated by the combined might of the Imperium and the Eldar. The Imperial Navy and Angels of Redemption tried to recapture one of the Fortresses, however it self-destructed, along with the three still in the Imperium's hands. The remaining two retreated with Abaddon back into the Eye of Terror. [1b]

These two would reappear, 800 years later, supporting Typhus and his Plaguefleet in Abaddon's 13th Black Crusade. They would later split up, each sent to reinforce the attacks on Cadia and Kasr Partox.[2] The Blackstone assaulting Cadia, the Will of Eternity, nearly destroyed the planet but was itself crippled by the Phalanx after a Space Wolves boarding party disabled its shields. The debris of the Will of Eternity was later redirected into Cadia by Abaddon, which shattered the planet.[4]

At some point, Abaddon gifted one of the Blackstone Fortresses to Huron Blackheart. This Fortress was later used to house the reborn Primarch Roboute Guilliman and his followers when they were captured during the Terran Crusade. It became the site of fierce fighting when Cypher and Sylandri Veilwalker freed Guilliman and his men.[5]

Later, Harlequins of the Masque of the Shattered Mirage launched a surprise attack on the Red Corsairs Blackstone Fortress, aided by a rogue faction from Yme-Loc. The Eldar seek to capture and control this ancient "Talisman of Vaul".[7] 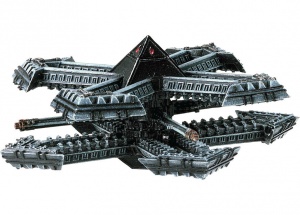