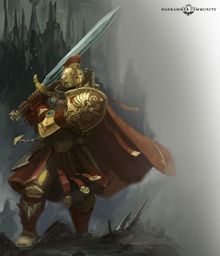 Blade Champions are Adeptus Custodes who seek out enemy leaders, to behead with their giant two handed Vaultswords.[1]

Blade Champions are afforded one of the greatest honours amongst the Custodes. After achieving many great deeds, their many names are etched within the Tome Eternal, which sits in the Emperor's own Throne Room.[3] Sitting below Shield-Captains in rank and serve as the second-in-command in Shield Companies, they act as leaders of smaller Adeptus Custodes forces[1]. In battle Blade Champions act as hunters of the highest caliber, seeking out and slaying key enemy commanders and champions in duels. Blade Champions often accrue unofficial bands of companions from within the Custodes and Sisters of Silence, leading them into battle.[3]

When not in battle, the Blade Champions practice the Custodes' Martial Ka'tah in the Imperial Palace's Colosseia Auris. Some of these fighting styles are only specifically used by the Champions' order.[2] 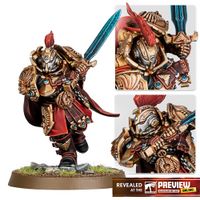