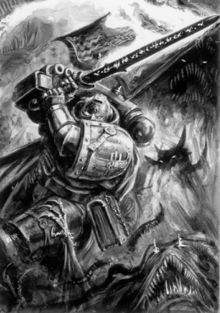 Castellan Crowe with the Blade of Antwyr

The Blade of Antwyr is a Grey Knights relic and Daemon Weapon, currently wielded by Garran Crowe. Although Crowe wields the Blade of Antwyr, he does not draw upon its otherworldly powers lest it destroy his very soul, and instead uses it as he would any blade of sharpened steel.[1]

The Blade of Antwyr is a mysterious and formidable weapon first discovered by the Apostles of the Blind King in the 37th Millennium during the Occlusiad War. It consequently corrupted one of the Blind King's followers. Possessed by the blade, this individual then launched a campaign which devastated the Vidar Sector, Tremayne Sector, and Darkspire Sector. Even though the Grey Knights defeated the blade's forces, it managed to escape into the Warp.[1] The Grey Knights were unable to secure the weapon for three millennia before finally capturing it on Tethys.[2a]

Knowing that the weapon was too dangerous to be left even on Titan, the Grey Knights eventually decided to safeguard it in the care of the Castellan Champion of the Purifiers, the leader of the Purifier Order.[2a] Castellan Crowe was chosen as the current guardian of the weapon following the death of the previous Castellan Champion, Merrat Gavallan, on Sandava II and he bears a great burden by wielding it. The Blade constantly tempts Crowe and attempts to corrupt him with its evil energies.[2b][2c]