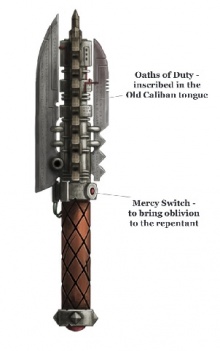 The Blades of Reason

Blades of Reason are specialised instruments of torture used by the Interrogator-Chaplains of the Dark Angels Space Marine Chapter[1a][2].

Ancient knife-shaped devices, Blades of Reason are etched with an incredibly complex set of neural wires, which are designed to cause intense pain to any nervous systems they come into contact with. Though capable of causing extraordinary amounts of pain, the nerve-searing effects of Blades of Reason are not fatal and so can be used on a victim virtually indefinitely[1b][2].

A victim of the Blades of Reason is normally expected to become broken both physically and mentally, and to confess to all their sins. Interrogator-Chaplains make particular use of them upon captured Fallen, but they serve also as means to get information from generic captured enemies (except Necrons and Tyranids, due to their physiology).[1b][2].