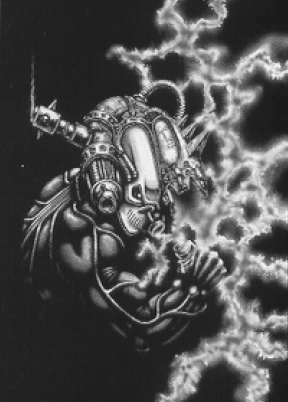 A Culexus Assassin, a type of Blank utilized by the Imperial Officio Assassinorum

Blanks, also known as untouchables, pariahs and psychic nulls[1], are an exceedingly rare type of human mutant that possesses no presence in the Warp. In fact, their brains actively blot it out, which disrupts psychic phenomena in their vicinity and renders them immune to psychic powers. Only humanity naturally produces blanks, though blanks have appeared in other races, such as the Eldar Solitaires.

The minds of most sentient beings have a connection to the Warp. This Warp signature is commonly called the soul. Psykers have especially strong connections to the Warp, and thus have very bright souls. On the other hand, blanks have no connection to the Warp whatsoever. On the contrary, their brains somehow push the Warp away from realspace.[Needs Citation]

The effect of this is that a blank dampens any psychic or Warp-related powers occurring within his aura's area of influence. A psyker standing in the area will find his powers weakened if not completely nullified. The blank himself is immune to all direct psychic effects (although a psyker could attack a blank indirectly by, say, telekinetically throwing a boulder at him from a distance). They are completely immune to daemonic possession and corruption by Chaos. They cannot be detected by most psychic means. Blanks are also found to affect the Hive Mind communication between Tyranid organisms, such as genestealers, though to a much lesser degree than they affect warp entities such as daemons.[Needs Citation]

To any being with a soul, the presence of a blank provokes irrational feelings of unease and hostility. These feelings may be mild in regular people, but in psykers they are unbearably strong. Blanks have a difficult time getting along with people, so they tend to lead short, unhappy lives, often on the fringes of society.[1]

The occurrence of psychic blanks among humanity has been attributed to a biological source known as the "Pariah gene", although evidence suggests that it is not actually a single gene at all. The Emperor of Mankind placed a moratorium on research into the source, after experiments by the Imperial Archotechnologist Corps and the Mechanicum in the early years of the Great Crusade ended in disaster. The origin of the "gene" is unknown, although theories range from it being the result of human experimentation during the Dark Age of Technology, xenos tampering, or even a natural evolutionary adaptation against the Warp.[2a]

The Sisters of Silence were the military arm of the Astra Telepathica during the Great Crusade and Horus Heresy. The Sisters were unique in that they were a military force consisting entirely of blanks. As in the end of M41 and early M42 they again actively set on campaigns with the resurrected Ultramarines primarch Roboute Guilliman and his forces.[Needs Citation]

The Culexus Temple of the Officio Assassinorum recruits blanks and trains them to be assassins specialized in hunting psykers. They are fitted with special equipment that enhances their powers.[Needs Citation]

The Inquisition makes eager use of blanks, as they are the most potent kind of anti-psyker tool there is. They are very useful in the fight against witches and daemons. The blank is typically made to follow his master around like a tourist, protecting his master from witchcraft and sorcery with his mere proximity.[Needs Citation]

At the time of the Horus Heresy, there were no known records of any Pariahs serving within either the Space Marines or Adeptus Custodes. Some scholars have suggested that this is due to the psychically infused nature of gene-seed, which could render it lethal if implanted in a subject with the Pariah gene.[2a] It is, however, possible for a Space Marine to be transformed into a Pariah after implantation, as is the case with the Ferrymen of the Grey Knights.[4]

During the Great Crusade and Horus Heresy, the Ordo Sinister exclusively employed blanks as the commanders of its Psi-Titans. Known as Preceptor-Intendants, these blank commanders were equivalent to the Princeps used by regular Titan Legions, but were also tasked with directing and focusing the powers of the psykers that were surgically bound into each Psi-Titan.[2b]

The Eldar view human blanks as abominations to be slain at every opportunity. Interestingly, the Eldar have blanks of their own, known as the Solitaires. These Eldar have lost their souls through unspecified means. They lead solitary lives away from their Craftworld kin, but are known to associate with the Harlequins.[Needs Citation]

The Necrons utilize Blackstone, a uniquer substance that has Warp nullifcation effects that led many in the Imperium to dub it "Pariah" Stone. However Blackstone can also be used to amplify the powers of the Warp should it be tuned the right way.[6]