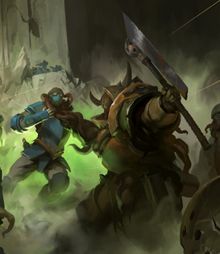 Forever fused with their mutated suits of Cataphractii Armour, Blightlord Terminators combine diseased resilience with the protection and firepower of a standard Terminator. In battle, they serve as the shock troops of the Death Guard and are present in most warbands of the Traitor Legion. Due to the amount of time they spend embarked upon diseased warships, Blightlord Terminators are saturated with the corruption of Nurgle. This foulness pours off them in waves, rotting flesh and corroding metal in an area around them. Where the Blightlords tread, crawling veins of corruption radiate. An enemy needs only to be gripped by them in order for these energies to start eating them away, while vehicles and fortifications exposed to the Blightlords’ presence quickly crumble.[1a]

On many ships, Blightlords act as an elite garrison, standing ready to defend their vessels During space battles, Death Guard Captains bring their ships in close to an enemy vessel, allowing massed formations of Blightlords to teleport directly aboard. Like parasites hatching in the body of a luckless victim, the Death Guard Terminators begin their destructive rampage.[1a] 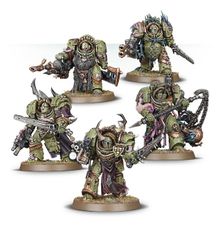