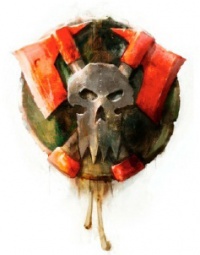 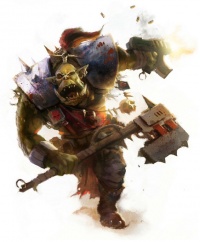 The Blood Axes are an Ork clan known for fielding many back-stabbing Kommandos. Their clan symbol is two crossed axes.[2]

The Blood Axes were the first of the clans to encounter the Imperium. During their exposure and battles they picked up many human tactics, such as using camouflage (although often it is too bright to actually disguise the Ork), using looted Imperial vehicles and retreating when they're losing. They were also exposed to human culture and values, making them seem less trustworthy to other Ork clans.[2]

They trade with humans for equipment and vehicles, and have even worked as mercenaries for the Imperium at times (such as the Battle at Big Toof River). All of these things lead followers of other clans to brand them as dangerously treacherous, cowardly, and downright un-Orky.[Needs Citation]

Blood Axe Beast Snaggas are generally more progressive than those of other clans, fielding large amounts of technology such as Gunwagons and Wartrakks. They also breed their Squigs to sport camouflage patterns and field large amounts of Squigback Raiderz.[5]