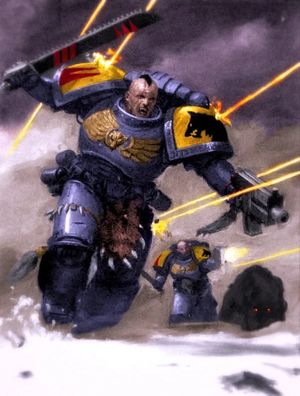 Blood Claw (or Blooded Claw[6]) is the first and lowest rank in the Space Wolves chapter, to which initiates are assigned after completing their basic training. Unlike Codex Chapters, which assign Neophyte Space Marines to begin their combat service as Scouts, the Space Wolves employ Neophytes as assault troops, allowing them to vent their youthful enthusiasm and lust for battle on the enemy.[1a]

The Wolves believe that real combat is the best form of training, and encourage Blood Claws to take their place at the vanguard and learn the skills of battle firsthand. The Blood Claws hardly need encouraging - thrilled at having joined the ranks of the mythical Sky Warriors, and eager to forge their own personal sagas, they charge with berserker ferocity and a reckless belief in their own invulnerability. Such a berserker charge can turn the tide of a battle, but it also leads Blood Claws to take risks that are suicidal even for a Space Marine. For this reason, Blood Claw packs are usually led by a senior member of the chapter, such as a Grey Hunter or a Wolf Guard, whose duty it is to rein in the worst of their recklessness and mark out those who show real potential for advancement.[1a]

A typical Blood Claw pack numbers between 5 and 15 marines.[1c] Casualties take their toll, and their numbers reduce quickly. To the Wolves, this is a necessary process to separate the men from the boys, and weed out those too weak, slow, or just plain unlucky, to become Grey Hunters.[1a] Some Blood Claws take longer to outgrow their reckless phase (and some never do at all). For these, the "reward" is usually assignment to a specialized unit that makes the most of their love for speed and willingness to charge headlong into the fray - either the Skyclaw assault packs or the Swiftclaw bike squadrons.[1d]

Since the induction of Primaris Space Marines into the Space Wolves, many Blood Claws violently confront the new warriors. The Space Wolves have been forced to implement a ritual to allow for unarmed combatants to release their aggression in non-fatal ways to deal with the problem.[5]

After completing their transformation into full-fledged Space Marines, Blood Claws are issued with suits of Power Armour, chainswords, and bolt pistols, along with frag and krak grenades, similar to the Assault Squads of Codex Chapters.[1b][1c]. One Blood Claw from each pack (or up to two in a pack of 15) may be equipped with a Flamer, Melta gun, Plasma gun, Plasma pistol, Power weapon, or Power fist.[1c]

The battlefield role of the Blood Claws, who represent the Neophytes of the Space Wolves, is detailed in the 2nd[Needs Citation], 3rd[Needs Citation] and 5th[1a] edition codices, but in the short story In the Belly of the Beast, a group of Neophyte Wolves are assigned to begin their service as Scouts, as is the practice in a typical Codex Chapter.[2]