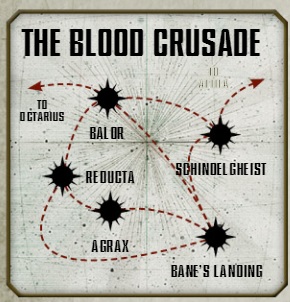 The course of the Blood Crusade

The Blood Crusade was a major offensive by Khorne across the Galaxy in the late 41st Millennium.[1a]

The Blood Crusade began during the Thirteenth Black Crusade, when the Great Rift was created and the Chaos God Khorne bellowed in celebration of the new conquests that would now be possible. This roar shook the galaxy and sent further splits within the Great Rift; worse, though, was that Khorne's servants answered the Chaos God's call and poured out of the Rift in large numbers. Khorne's hordes then split into eight directions and began riding the crests of the newly created warp storms, known as the Blood Waves, across the galaxy. Worlds that were hit by the Blood Waves would soon be invaded by the Blood Crusade, as Khorne's followers would materialize from nowhere and deliver murder and mayhem, before the Crusade suddenly disappeared when the Blood Waves moved on to new locations. This tactic left many of the Crusade's victims unprepared to defend themselves, and in fact Khorne's Blood Crusade only met its match on two occasions.[1a]

One such occurrence took place during the Octarius War, when the Ork forces of Warlord Ghazghkull and the Tyranids of Hive Fleet Leviathan fought the Blood Crusade to a standstill, before the Blood Waves moved on once more. Despite these minor incidents, the unrelenting Blood Crusade eradicated the entire populations of worlds from the Imperium and Necron Dynasties and even destroyed whole Hive Fleets, as they honoured Khorne's name. However, as suddenly as the Chaos God created the Blood Crusade, it was ended, after Tzeentch whispered to Khorne[1a] of the existence of Nurgle's Scourge Stars[1b]. Once Khorne learned of Nurgle's new empire of corrupted worlds, the Blood Crusade was ended and the Chaos God's forces immediately invaded the Scourge Stars, in what became known as the War in the Rift.[1a]

During the Blood Crusade, the Eldar Craftworld of Saim-Hann sent five entire clans to hold back Khornate forces upon Upsilon, securing a fraught victory before disappearing to leave the planet's Human survivors confused but unmolested.[2]