The Blood Drinkers are a successor chapter of the Blood Angels Legion. 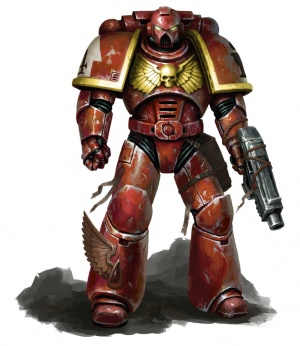 A Space Marine of the Blood Drinkers.[11]

Strict followers of the Codex Astartes, the Blood Drinkers have blood-drinking rituals and suffer a literal blood-lust, due to a mutation of the chapter's Omophagea gene seed[2]. Members of the Chapter are described as having a perpetual air of aridity, likely due to the above mutation[4b].

While they seem to have overcome the worst aspects of the flaw of the Blood Angels Successors, with low incidence of "Black Rage" and a small Death Company, the truth is that instead of denying or controlling the "Red Thirst", they surrender to it.[7]

The truth behind the Blood Drinkers is far more insidious however. By M37 the Blood Drinkers were a dying chapter, brothers succumbed to the Black Rage as soon as they were fully initiated. A battle-brother named Holos, against the orders of the Chapter Council, followed a dream that told him to ascend to the top of Mount Calicium. At the peak he supposedly met an angel, some claim it to be Sanguinius, who told him how to save his dying Chapter. The Rite of Holos as it came to be known is a gathering of marines, rank is suspended in these meetings apart from Chaplains and Sanguinary Priests, where the marines drink blood from serfs who provide it freely, and sacrifice an unwilling victim. "Blood given, blood taken." This balances the ritual and calms the Thirst.[9]

However the truth behind the Rite was that Holos was visited not by an angel but by a Daemon, heavily implied to be Kairos Fateweaver, who made a deal with the battle-brother. In exchange for the blood drinking Rite that would save thousands of brothers from the Death Company, Kairos would gain the ability to change the visions of a select few Death Company marines from the normal visions of Sanguinius' death to those of Holos and the daemon itself. As of M39 eighteen brothers had witnessed it, and Kairos has spoken through the memories to each battle-brother, tempting them with the power of Chaos. If one even so much as thinks of accepting Kairos's offer the entire Chapter will be damned and fall to Chaos. Thus far all have refused Kairos, but the Daemon cares not as only a single "Yes" is necessary for the Blood Drinkers to be damned forever. Only the Reclusiarchs know the truth behind the Rite, though it is unknown if they wish the Chapter to fall.[9]

Blood Drinkers practice some mysterious and suspicious rituals, such as the Sanguis Excrucio and the Red Tears.[13]

According to Codex: Blood Angels (5th Edition), they are of an unknown founding.[5]