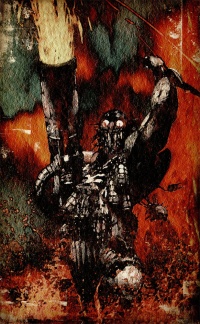 An Imperial soldier's rendition of a Blood Pact soldier[4b]

What they conquer and tear down by force of arms is bad enough, but the damage done by the very dread of them is disastrous.

The Blood Pact is a highly organized Chaos Cult devoted to Khorne. Unlike many cultist warbands, the Pact fought as a disciplined army, similar in training and organization to the Imperial Guard. Originating as the personal army of the warlord Urlock Gaur, they quickly became a dominant "elite" of the Chaos forces opposing the Sabbat Worlds Crusade, and caused the people of the Imperium no small amount of suffering and woe.[4x]

The exact origin of the Blood Pact is unknown, but it is generally held they originated some 3,000 years ago on a planet known as Ghourra, sometimes pronounced Gaurra, at the edge of the Sabbat Worlds.[4x]

At that time, the tribal society of Ghourra was ruled by a feudal overlord, or Gaur (sometimes referred to as "Ghour" or "Gour"). The Gaur surrounded himself with an elite priesthood who conducted the ritual observances by which the Gaur made tribute to his god, Khorne. This militant-priesthood evolved over time into a bodyguard force which practiced its martial skills as diligently as it had once conducted its bloody sacrificial rites.[4x]

As the Gaur's influence grew and spread to neighboring worlds, it was this bodyguard force that led his conquering armies. It soon became a mark of respect to be 'bloody-pacted" to the Gaur. Numbers grew, recruited from vassal worlds, and the bodyguard force eventually became an army in its own right; the current Blood Pact.[4x]

Uniquely, every single member of the Blood Pact (and Imperial tactical estimates suggest there may be as many as three quarters of a million Blood Pact warriors) is personally inducted into service by the Gaur himself. To prove his allegiance in blood to both the Gaur and the Blood God, each aspirant ritually gashes his hands on the sharpened edges of the Gaur's battle armor.[4x]

The Imperium's first encounter with the Blood Pact occurred in the aftermath of the Battle of Balhaut in 765.M41, when Archon Nadzybar was slain in personal combat with Warmaster Slaydo. A member of Slaydo's bodyguard unit, Sergeant Commodus Ryland, was captured and interrogated by a cultist, identifying herself as a warrior of the Blood Pact, loyal to Urlock Gaur.[5]

After a period of infighting between Nadzybar's Magisters and Paters, Gaur emerged to take Nadzybar's place as the new Archon.[4x] Although the Gaur was never counted among the most charismatic or tactically brilliant of Nadzybar's lieutenants, his possession of a sizable, disciplined army - the Blood Pact - allowed him to dominate the other Chaos warhosts.[4x]

Gaur's Blood Pact had been encountered in combat during the early years of the Crusade, but never properly identified. However, once he became Archon, the Blood Pact became a backbone element of the Chaos host. It is believed many other arch-enemy units and divisions, wishing to prove their loyalty to the new Archon, converted to the Blood Pact. Within just a few years, the Crusade forces came to recognize the Blood Pact as elite infantry of the arch-enemy.[1]

This recognition was aptly demonstrated at the Battle of the Akkorite Peninsula on Belshiir Binary in 771. A vital and much-contested world due to its promethium wells, refineries and processing depots, Belshiir Binary was the site of a notable Blood Pact victory. A force of two hundred Blood Pact troopers, supported by just four stalk-tanks and two Loxatl brood groups, cut off and annihilated a force of three thousand Imperial Guardsmen. The outnumbered Blood Pact force was commanded by an officer called Vesh Etogaur (the second word possibly indicative of rank, as in 'demi-gaur' or colonel) whose strict command led to the Pact force lying in baking heat for three days without breaking cover until the Imperial forces had moved into the cone of their ambush. The resulting combat lasted twenty-two minutes. No members of the Guard unit survived the slaughter, and the Akkorite Peninsula refinery remained under Chaotic control for a further fifteen months.[2][4x]

Blood Pact warriors usually resemble a particularly ragged or barbaric regiment of the Imperial Guard. They wear fabric battledress uniforms either looted from the corpses of Guardsmen, or manufactured to resemble a basic Imperial design. Over this are worn packs, webbing and the usual assortment of infantry kit, including a steel bowl-helmet. Because their kit, equipment and battle dress is essentially a mix of plunder and homemade, no two Blood Pact troopers are ever identical. Their appearance is rough and ill-kempt: their clothing torn, patched and dirty, and helmets chipped and dented.[4x]

A Blood Pact member is most characterized by their ritual iron visor, known as a "grotesque," and which is worn by all human members. These generally portray a grimacing, or leering face, often coupled with an exaggerated hooked nose or chin. These masks are usually a black color, although it has been known for senior officers to wear one of gold or silver.[4x]

Their armor and clothing is all a drab red, the color of dried blood. In fact, one of the Pact's rituals prior to battle is to dye their clothing with the blood of their enemy. As a result, the Blood Pact warriors exude a revolting, charnel stink, made even less palatable by the unguents and oils with which they anoint their bodies and their own lax standards of hygiene. Their support vehicles all tend to be painted this universal crimson as well.[4x]

A Blood Pact warrior's hands always remain bare to display the ritual scars across the palms and knuckles, made at the time of induction to the Pact. Often this ritual scarring covers other parts of the body and face. The deeper and more severe the wounds, and the amount, are part of a unofficial honour system and devotion to Khorne.[4x] 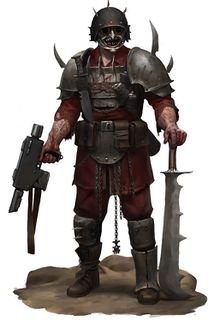 The Blood Pact, originally consisting of soldiers from the worlds around Ghourra, is a diverse organization. As the Blood Pact rose to prominence amongst the forces holding the Sabbat Worlds, many lesser war bands and forces submitted to their rule and were absorbed. The leaders of the Pact willingly encourage the integration of other Chaos war bands, especially traitor Imperial Guard regiments and soldiers. The Blood Pact is also allied with alien races and mercenaries, such as the Loxatl.[4x]

The Blood Pact is a highly organized army, consisting of soldiers rather than blood-crazed cultists. They often have support in the forms of plundered tanks, which are often looted from defeated Imperial armies or manufactured in captured Forge Worlds. They are drilled and trained in warfare techniques to a standard of competence at least equivalent to the Imperial Guard. They have excellent (often captured) communication systems, and a firm chain of command, meaning that they can be confidently deployed with tactical precision. A Blood Pact General is called an Etogaur. The Blood Pact can hit specific targets or accomplish specific missions, and individual warriors have the intelligence and field training to operate independently, if necessary, for the Pact's interests. This is what makes them so dangerous. They are not mindless fanatics; they are excellent battlefield soldiers in the sworn service of Chaos.[4x]

Certain elite or veteran sections of the Pact form the so-called Death Brigades, representing the finest and most ruthless storm squads in the Blood Pact. Though few in number, the Death Brigades are often encountered at the spearhead of assaults, as the private company of senior Chaos leaders, or deployed on specialist missions, and are the most dreaded of all Blood Pact units.[4x]

Unlike most Khorne worshipers, the Blood Pact favors a more disciplined and tactical style, emphasizing the martial aspects of the Blood God over those of the berserker. This means that the average Blood Pact trooper will be armed with a lasgun or autogun as his primary weapon. In close-quarter environments such as trenches or when storming techniques are required, they favor plate or chain mail tunics and arm themselves with billhooks, trench clubs and grenades. Some are able combat specialists in the field of demolition or sniping.[4x]

Blood Pact units will often contain a mix of heavy and support weapons akin to those of the Imperial Guard. Some Imperial tacticians claim that the officers of the Blood Pact deliberately style themselves on the Imperial Guard, and it is certainly the case that traitor Guardsmen are used to hone and improve the basic combat abilities of the Pact. Such traitors, due to their relative rareness, are distributed throughout the Pact's numbers to disseminate good techniques. Others point out that Blood Pact armaments resemble those of the Imperial Guard because these are the most commonly plundered. Several munitions-producing Forge Worlds - especially Neffethyl and Urdesh — were amongst the planets conquered in the Sabbat cluster, and from them the Blood Pact have enjoyed a ready supply of Guard-quality weapons.[4x]

The Blood Pact - thanks to these captured Forge Worlds - have numerous armor and artillery formations. Blood Pact armor is generally slightly inferior to standard Imperial issue, most of it being Urdeshi-pattern variants such as the STeG 4, and the AT70 Reaver Battle Tanks, though they do also have more limited numbers of the larger and more powerful AT83 Brigand-pattern tanks as well as a few of the rare Baneblade super-heavy tanks. The Blood Pact also field a lighter-armored variation of the Defiler known as the Stalk Tank. All Blood Pact armoured vehicles are painted red, inscribed with numerous obscene Khornate slogans, and are often decorated with the skulls and hides of their enemies.[1]

In addition to their fearsome weaponry and vehicles, the Blood Pact have special psykers known as Gore Mages. These dark wizards can possess Blood Pact warriors with Daemonic spirits, turning them into ferocious, almost unstoppable creatures that they call Blood Wolves. Also, Gore Mages radiate a sense of irrational fear and have access to many other powers involving blood.[3]