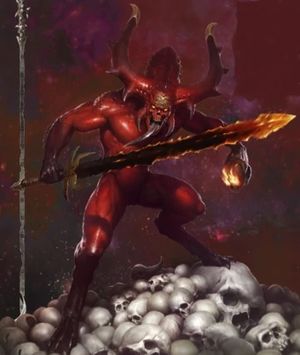 Bloodletters are the Lesser Daemons of Khorne, eager foot soldiers that form the core of his vast legions. Possessed of enormous strength, they are renowned for the savage ferocity of their charges. As a host, they march as one in complex formations with supernatural precision, maneuvering for the utmost advantage, but in battle they try to outdo each other in ruthless acts of cruelty and savagery.[1][2][3]

Bloodletters possess bestial, snarling faces and wiry, crooked bodies surrounded by a reek of gore, and skin the color of blood. Like all of Khorne's creatures they are formidable and ferocious warriors, among the deadliest in the galaxy with savage ferocity and, being daemons, strength far out of proportion to their body mass. Each Bloodletter is a natural master of combat, borne of constantly fighting their brethren in the warp when not killing enemies on the battlefield. Bloodletters go into battle with the deadly Hellblade.[1][2][3] Others wield an Instrument of Chaos or Banner of Blood.[7]

Led into battle in vast legions by the most veteran of their number, the Heralds of Khorne, they tend to march in disciplined regiments accompanied by horns and drums, a living example of Khorne's militarism and a sharp contrast to the armies of other Chaos Gods. However, the craving for skulls, bloodshed and competing for personal glory and the glory of Khorne in battle usually turns this discipline into frenzy once they charge the enemy. Bloodletters are notorious for their fearsome advances and ferociously brutal charges but are also capable of vile and low tactics.[1][2][3]

Champions of Bloodletters are called Bloodhunters.[6][7]

Only the strongest Bloodletters can hope to claim a Juggernaut of Khorne as their mount. Those who succeed become Bloodcrushers, Daemonic Knights that are feared for their almost unstoppable charges.[1]