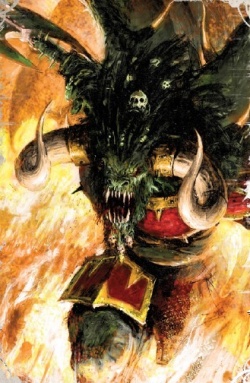 Bloodthirsters are the Greater Daemons of Khorne. These savage beasts exhibit extreme rage and bloodlust.

Bloodthirsters are the most savage and martial of the Blood God's servants. Their bloodlust extends beyond mortal comprehension and their power is said to be only matched by the Primarchs of old.[1][2][3]

They manifest as towering, muscular behemoths with bestial, almost canine faces, bloodied manes and sharp horns and are clad in the Brass Armour of Khorne which protects them from magic spells and from ranged attacks.[1][3][4] More noteworthy are their great leathery wings that allow them to dive into the midst of battle.[3] In combat they use immense Axes that have been forged in the heat of Khorne's wrath and bear the essence of a caged Greater Daemon in conjunction with a long whip known as a Gorewhip that allows them to attack more distant foes.[1][4] Some of the most favored Bloodthirsters of Khorne will also wield great Firestorm Blades.[12a]

Only those well versed in daemonic lore are aware of the Bloodthirster hierarchy. They are organized into eight hosts, ascending in power, prestige, and favour. Each Bloodthirster commands its own legions of daemons and possesses its own lethal skills. Underestimating even those of the eighth and weakest host is a fatal error; they are still greater daemons and far more powerful than any mortal warriors.[13a]