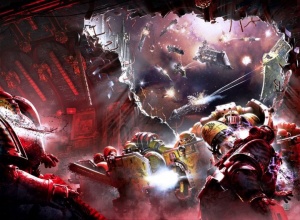 An Imperial Fists boarding party equipped with Boarding Shields, during the Battle at the Phall system.

Boarding Shields[1] (or Breacher Shields)[5] are shields used by Space Marines during boarding operations, allowing them to absorb incoming enemy fire. They are also employed during siege operations.[1]

A bulkier version of the standard Combat Shields[3], the boarding shields were the wargear of choice for Space Marine Legion squads before the introduction of the storm shields, with the main task of breaching enemy ships and performing siege assaults[2] Although the protective field of Boarding Shields was inferior to the field of mighty Storm Shields the prototypes of which were beginning to enter service of Legiones Astartes at the time of the Horus Heresy,[3] the boarding shield provided additional protection as its bulk reduced the effectiveness of a direct enemy attack against the shield bearer. The generators used in combat and boarding shields at the time of the Horus Heresy were also refined to offer increased protection from close combat attacks. With these benefits, the venerable boarding shield remained an essential part of the Legions’ armouries long after the storm shield came into common service.[2]