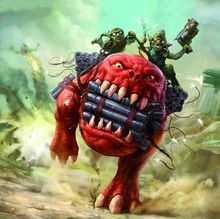 The Bomb Squig is a type of Ork Squig converted into a living weapon[1].

Orks sometimes use Squigs as running explosives, exploiting their natural tendency to chase anything that moves. Explosives are strapped to their sides or gripped firmly in their teeth and when properly goaded, they run headlong at the desired target, usually enemy vehicles. The best bomb squigs will have undergone rudimentary training to hunt enemy tanks, chasing through the tribe’s encampment after a looted wagon to snatch juicy Snotling rewards off its back bumper. However, these creatures are not famed for their intellect and can sometimes chase a friendly vehicle instead - a price Orks are willing to pay. Bomb squigs have been seen taking to the field strapped with everything from tankbusta bombs and pressure-mines to directionally explosive cranial transplants, but usually are equipped with as many Stikkbombs as possible.[2] Imperial post-action reports even claim that the Ultresica Breach Disaster began with a single, mad-eyed bomb squig charging into the midst of the Corscan 3rd Artillery with a filched vortex grenade clamped between its teeth.[2] These living weapons are usually used by Ork Tankbustas.[3]