A Bonesword is a Tyranid close combat Biomorph which can drain the life-force out of its victims.[1]

A bonesword is living organism, which has a small brain situated deep within its hilt and has a rudimentary sentience that allows it to gradually grow in length and repair any battle damage to itself and maintain a deadly monomolecular edge. However, it is completely slaved to the will of its wielder and is incapable of any independent thought.[1] The weapon is made of chitin and constantly crackles with powerful psychic energy that flows along embedded nerve tendrils to create a psychic field around the blade, effectively creating a biological version of a force weapon. This energy amplifies in potency when in close proximity to another bonesword, such as when used in pairs[3]. It is serrated on both edges and was originally a creature's massively elongated horn.[3]

The bonesword can generate a powerful surge of psychic energy when stimulated by its user.[1]

In 4th Edition, the bonesword's hilt, when stimulated by combat, can send out psychic pulses to nearby Tyranid creatures with the aims of whipping them into a killing frenzy.[2] This ability is not present in the 5th Edition version. 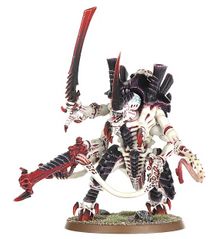 Hive Tyrant armed with a Bonesword and Heavy Venom Cannon.