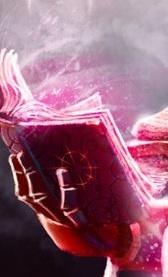 The Book of Lorgar[5]

The Book of Lorgar was said to be a tome penned by the Primarch Lorgar himself.[1a]

Following his dealings with old priesthoods and their dark masters. By the time of the Battle of Calth, the Book of Lorgar was 9,752 volumes and counting.[1a] His Astartes Legion, the Word Bearers, held this text as almost sacred, in spite of the concern this caused for others, including the Emperor himself.[Needs Citation]Chaplain Erebus bore tattoos upon his shaven scalp said to depict long passages from the book, that he might terrify his foes with the strength of his conviction. While attempting to decode these tattoos and text from the book itself, Imperial iterator Kyril Sindermann inadvertently summoned a daemon from the Warp which destroyed many of the archives aboard the Vengeful Spirit before it was banished once more.[4]

Known passages from the Book of Lorgar:

Opening lines of the Book of Lorgar: "All I ever wanted was the truth. Remember those words as you read the ones that follow. I never set out to topple my father's kingdom of lies from a sense of misplaced pride. I never wanted to bleed the species to its marrow, reaving half of the galaxy clean of human life in this bitter crusade. I never desired any of this, though I know the reasons for which it must be done. But all I ever wanted was the truth."[2]

Excerpt from the three hundred and forty-first Book of Epistles of Lorgar: "From the fires of Betrayal unto the blood of revenge we bring the name of Lorgar, the Bearer of the Word, the favored Son of Chaos, all praise be given to him. From those that would not heed we offer praise to those who do, that they might turn their gaze our way and gift us with the Boon of Pain, to turn the Galaxy red with the blood, and feed the hunger of the Gods."[3]