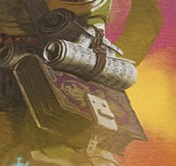 The Book of Magnus[5]

The Book of Magnus[1b] (sometimes called the Book of the Thousand Sons)[Needs Citation] is a monumental tome of sorcery compiled by Magnus the Red from the arcane lore he gathered from all across the galaxy during the Great Crusade.[4] The book was written by Magnus through his personal scribe Mahavastu Kallimakus.[1b] Later during the Horus Heresy, the Daemon Fateweaver manipulated Hathor Maat into altering a single line on the book.[3]

The original still exists within the library of the daemon-primarch Magnus,[2] atop the Tower of the Cyclops[4] on the Planet of the Sorcerers[2] and Magnus takes it with him when he strides to war. The book has several copies - one of them has Ahriman, taking a copy before his exile[4], while another copy is said to reside in the Black Library of Chaos.[2]

"The ancient knights' quest for the Grail, the alchemists' search for the Stone of the Philosophers, all were part of the Great Work and therefore endless. Success only opens up new avenues of brilliant possibility. Such a task is eternal and its joys without bounds; for the whole universe and all its wonders...what is it but the infinite playground of the Crowned and Conquering Child, of the insatiable, the innocent, the ever-rejoicing heirs of the galaxy and eternity, whose name is Mankind?"[1a]