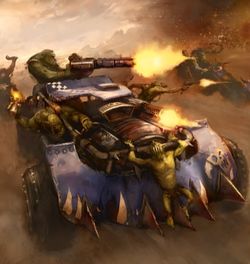 A lightly built speedster based around looted vehicle frames, Snazzawagons are clad in hastily welded scrap armor. Their shambling design means even their drivers know a single well-placed shot is likely to destroy the vehicle, but their extreme speed allows them to avoid much of enemy fire. Snazzwagon drivers race each other to the frontlines, howling with glee as they pump their accelerators and coax ever more speed out of their unstable rides. Meanwhile, their crews hang on for dear life and prepare to unleash their vehicle's weaponry upon their foe.[1]

Snazzwagons boast only a single primary weapon, an enormous gatling gun known as the Mek Speshul which is capable of laying down a hail of red-hot projectiles at a constant stream. Yet it is not this weapon that causes Snazzwagons to become popular with speed-crazed Burna Boyz, but rather the extensive cache of burna bottles crammed into every available orifice of the vehicle. These simple but brutally effective weapons consist of a class bottle (or clay pot in the case of Snakebite vehicles) filled with Squig oil, promethium, and anything else the Orks can think of that can catch fire. As the Snazzwagon speeds through battle, Burna's light these bottles and let them fly. The resulting firestorm is every bit as dangerous to the vehicle as it is to their victims, but the sheer devastation and spectacle it can cause is more than worth a few exploding vehicles.[1] 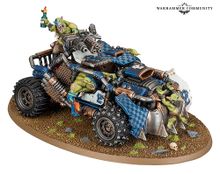