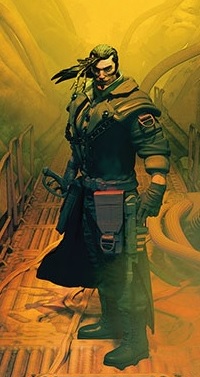 Bounty Hunters are Imperial or Xenos citizens who are licensed by their worlds to capture or kill fugitives, criminals and creatures for a bounty[1a]. Some Imperial worlds are known to even allow Mutants, Abhumans and Xenos to serve as Bounty Hunters as well.[3a]

On Necromunda, they are amongst the toughest and most dangerous of all Underhivers and are drawn from a wide range of backgrounds. They tend to be loners who neither need nor want to be associated with a gang, though some are erstwhile gangers and might still bear some of the distinctive trappings of their former Clan House. Many Abhumans on Necronmunda also find the life of a Bounty Hunter suits them well, for the Blood Warrant that serves as their license and writ allows them to go where others of their kind might ordinarily be barred. Thus, it is not uncommon to see Beastmen, Squats and other stable Abhuman strains operating as Bounty Hunters far from those areas on Necronmunda that are set aside for their kind[1a]. The Merchants Guild also has their own private order of Bounty Hunters, known as Adurators, who are granted special privileges and are equipped with the best weaponry and equipment the Guild has to offer. While they normally work on Guild bounties, it is not unusual for an Adurator to also collect bounties in the Underhive, where they can more easily throw their Guild authority around.[1b]

The majority of official bounties on Necronmunda are displayed at Trading Posts in the Underhive, and offer rewards to anyone who brings in outlaw leaders, gangs, mutants and other criminal types. The rewards offered are good, but the job is a perilous one and many Bounty Hunters die out in the wastes, slain by the outlaws and mutants they set out to hunt[1a]. While they tend to work alone, some bounties may be so dangerous that it requires several Bounty Hunters to work together in brief alliances called Venators[2]. Though some can become permanent partnerships and it is not unusual to see Venators, composed of blood relatives whose families have bounty hunted for generations[3a]. It is also common for Bounty Hunters to hire their services to a gang leader, if there are no decent bounties to be had or if their interests and the gang's are aligned, but such allegiances tend to be temporary.[1a]

The Hive World also has the Psi-Hounds, which are bounty hunting Psykers created and controlled by Lord Helmawr's Psykanarium program, and the Psylock Cabals, who offer to hire out their Psykers to Bounty Hunters.[3a]