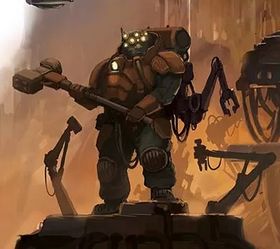 The Brôkhyr are the Leagues of Votann's engineers, who command the auto-foundries of each of the species' Strongholds from their personal A.N-vyl terminals.[1]

Brokhyr are craftsmen of unparalleled skill who work within their Hold's forges and aided by COG robot assistants. Each Brôkhyr takes pride in constructing their own devices, following traditional schematics but humbly applying their own ingenuity to improve the base design. Through this process, each Brôkhyr develops their own preferences and quirks, which become known as their signature. The most effacious signatures are adopted by fellow Brôkhyr so that, over time, many Kindreds - or even entire Leagues - have adopted their methods of crafting and manufacture. This slow but relentless process of improving upon understood technologies has helped the Kin develop their original STCs even further.[32]

When the Oathbands head to battle, however, they strap into powerful exo-frames to become the mighty Brôkhyr Thunderkyn. These suits are adapted from rugged engineering rigs and while not quite as scratch-resistant as the Einhyr Hearthguard's Exo-armour, they can still weather considerable fire. The Thunderkyn are still powerful despite this, as their suits allow them to heft the heaviest man-portable weapons the Leagues of Votann can muster with ease. Among them are Votann Bolt Cannons, whose salvos can slay hordes of enemies, Graviton Blast Cannons, and SP Conversion Beamers, whose unstoppable lances can pierce their foes' heavy infantry. The Brôkhyr advanced engineering equipment also helps out, with Omni-visors able to pick out the telltale signs of enemy units through dense terrain.[3]

The Iron-masters are the elite of the Brôkhyr and when called to battle, they have a knack for repairing even the most beaten-up of the Leagues of Votann's vehicles. In war they wield Autoch-pattern Bolt Pistols, Graviton Hammers, and Graviton Rifles. A dutiful Ironkin assistant and a gaggle of E-COGs will also frequently accompany an Iron-master and carry further equipment such as a Plasma Torch, Las-Beam Cutter, and manipulator arms.[5]

Brôkhyr Forge-Masters are the highest of their order and one of these esteemed craftsmen sits on their Kindred's Votannic Council. To become a Forge-Master, a Brokhyr must prove their worth at not only crafting, but also at overseeing the deployment of their technologies. It is their duty to fashion the tools of war that will be wielded by their Kindred's greatest heroes, themselves included. They must further embody the fury of their Forge upon the battlefield, providing wise counsel on everything from siegecraft to field repair.[7b]

The name Brôkhyr could be inspired by the dwarf Brokkr from Norse mythology. Literally Brokkr translates as "the one who works with metal fragments" or "blacksmith".