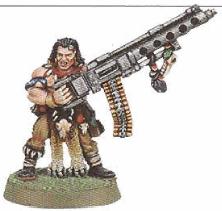 Brakar - The Avenger, He That Rains Death

When members of a Ratskin tribe found a man on the verge of death in a secluded, crumbling tunnel, they took him in and nursed him back to health. How he had come to be there, and how he had received his horrendous head wounds were a mystery to everyone, most of all to the man himself. In time he recovered physically, though his memories remained a blank. He could still speak, and knew how to use the Heavy Stubber that had been found beside him with deadly accuracy but no clues as to who he might be came forth.[1]

While he was away from the tribe a Van Saar gang attacked the Ratskins and killed them to a man. He returned to find the Van Saars picking over the bodies of his rescuers, and in a rage drove them off single-handed, killing over half of them with short, lethal bursts from his weapon. Since that time they say he has roamed the wilderness of the Underhive alone, aiding any Ratskin tribes he encounters who may need his help and meting out vengeance on all those who would attack his Ratskin brothers without cause.[1]

The Ratskin tribes have given him the name of their god of war and revenge. He is Brakar - The Avenger, He That Rains Death.[1]