Bran Redmaw is a Wolf Lord of the Bloodmaws Great Company of the Space Wolves as of late M41.[1a] 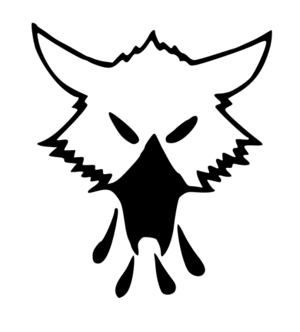 The Badge of the Bloodied Hunter[1a]

Bran's personal icon is the Bloodied Hunter, which fits him and his Great Company well. Bran and his followers are natural hunters, and Bran has a natural talent for second-guessing his enemies' moves. He specialises in encircling actions, positioning his Grey Hunters to lie in wait as his enemy flees in the face of his front-line advance. Once his enemy is trapped, Bran's Wolves unleash their savagery, and their enemy is literally torn to pieces,[1a]

The symbol of the Bloodied Hunter is associated with the Mark of the Wulfen, and there are a high number of battle-brothers in Bran's Company said to bear that curse. There are even rumors that Bran himself transforms into a monstrous creature in the heat of battle.[1a]