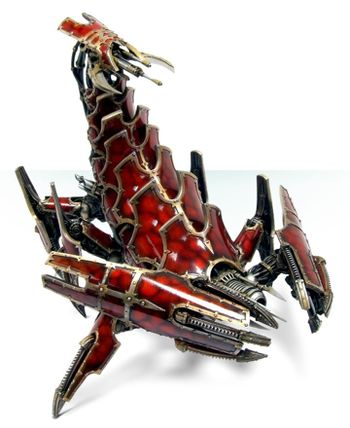 The Brass Scorpions is a Super Heavy Daemon Engine, dedicated to the Blood God Khorne.[1]

The Scorpion is deceptively fast and agile for a vehicle of its size and excels at attacking fortified positions and engaging entrenched infantry. The Brass Scorpion seems to be imbued with a predator's insincts and has shown a level of bloodlust and delight for slaughter rarely matched even my other machines found amongst the arsenals of Chaos forces. There appear to be various configurations of Brass Scorpion in use by the traitor legions, ranging in size from that of a Leman Russ Battle Tank to that of small Titans. Like other many Khornate Daemon Engines, the Brass Scorpion is inscribed with Runes of the Blood God, granting it added defense against psychic powers.[1]}}

It is believed by the Ordo Malleus that the Brass Scorpion is a creation of the Dark Mechanicum — the former members of the Adeptus Mechanicus who sided with the rebels during the Horus Heresy.[1]

Whilst there have been variations in armament noted, the most common weapon layout consists of:[1]