The Brazen Claws are a successor Chapter of the Iron Hands and are a Codex Chapter, with the exception of having the company colour instead displayed on the chest eagle.

The Brazen Claws' homeworld of Talus IV was destroyed by a horde of daemons and the Chapter was forced to flee the planet as it fell to Chaos. They then went on a Crusade against the forces of Chaos into the Eye of Terror to earn vengeance and regain their honor and were rarely seen in the Imperium thereafter.[8] The crusade turned out to be a disaster, with many hundreds of battle brothers dying for little gain. Some Captains abandoned the crusade, seeing little worth in it and wishing to rebuild the Chapter. Others were killed in noble, but ultimately meaningless combat on daemon worlds. Worse still, several companies turned from the Emperor's light and embraced Chaos. Following twenty years of defeat and Pyrrhic victories, Chapter Master Caul Engentre ordered the chapter to return to the Imperium and rebuild. Just as the remaining companies were boarding their ships, an ambush was launched and a dozen warships and two full companies of traitor Brazen Claws jumped in system and attacked. The result of the battle is unclear.[10] 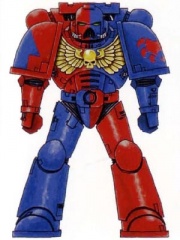 Lord Castellan Creed of Cadia insisted that the Chapter still fought for the Imperium and, indeed, it participated in the defence of Cadia during Abaddon the Despoiler's 13th Black Crusade.[5][9]

Three full companies of Brazen Claws were present at Vigilus, participating in quarantine of Dontoria.[13]

Despite this, the Chapter is described as having "fallen", but it is not known if the Claws have all turned to Chaos.[7]