Bringers of Death is a compilation of short stories set in the Warhammer 40,000 universe edited by Marc Gascoigne and Christian Dunn. It was first published in 2005.

Tells the story of a Sergeant in the 902nd Vardan Rifles who has been accused of charges of Heresy and being a Traitor to the Imperial Guard. Taken for questioning by the commissariat he has to explain his story or face the wrath of The Emperor!

Xenocide covers the invasion of Samax IV by Orks and the defense by the indigenous Humans and the Imperial Hawks Space Marine chapter.

Sector 13 tells the Story of the legendary Ciaphas Cain while stationed on the planet of Keffia. He goes to sort out a regimental discipline issue in a local town stationed near his unit — the Valhallan 12th Field Artillery — but this simple investigation leads him into an even deeper and scarier secret than he ever could have imagined. 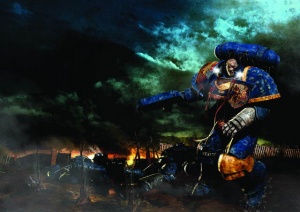