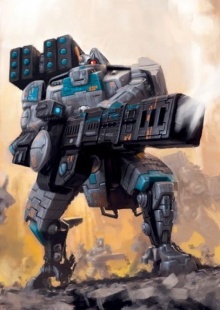 The Broadside Battlesuit or XV-88 is the heaviest variant of the Crisis Battlesuit. Used by the Tau, these Battlesuits' design is an effective compromise between offensive firepower, defensive protection, and tactical maneuverability.[3]

The original generation of XV88 Battlesuits mounted their twin Railguns on their shoulders, but recent Earth Caste innovations have found that a Heavy Rail Rifle mounted in a hand-held position is more efficient.[7] 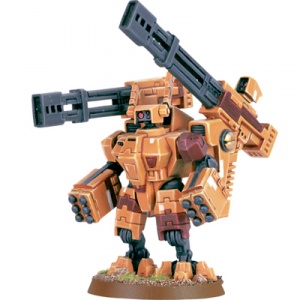 Originally it was just an experiment - to combine the most successful Tau vehicle weapon – the railgun – with the XV8 Crisis Battlesuit. Early Broadside prototypes were cumbersome, their shoulder-mounted weapons unwieldy. However, Earth caste made adaptations, one iteration at a time, until at last the XV88 emerged.[9]

The repulsor jets of the XV8, which output insufficient to lift such a heavy weight, were substituted by additional layers of armour plating, allowing battlesuit to weather rather than evade incoming fire. The additional recoil dampers and ballistic anchors provide increased accuracy and an extended arsenal of heavy weaponry, which means Broadsides can be equipped to engage massed infantry or armoured targets with equal success.[9]

Broadside Battlesuits are only issued to Shas'ui veterans who have gained sufficient experience piloting Crisis Battlesuits.[1] The jetpacks commonly found on Crisis suits are replaced with twin-linked Railguns or Heavy Rail Rifles or large numbers of Missile Pods, some of the most powerful anti-tank weapons available in the Tau arsenal.[1] It is known that exactly the Great War of Confederation force the XV88 Broadside to change their Heavy Rail Rifles to Missile Pods to better tackle the Ork hordes that repeatedly assaulted their lines.[8] Other armament includes either a twin-linked Smart Missile System or twin-linked Plasma Rifles, along with a single Battlesuit support system. The Broadside is mounted with a Particle Accelerator on its back which is used to power its heavy rail weapons.[6]

Being one of the most well protected units in the Tau arsenal, there are reports of Broadside battlesuits surviving direct hits from autocannon and lascannon fire, and they provide as much protection as a suit of Terminator Armour, but unlike the Imperium, the Tau are able to manufacture such heavy suits in huge quantities.[3]