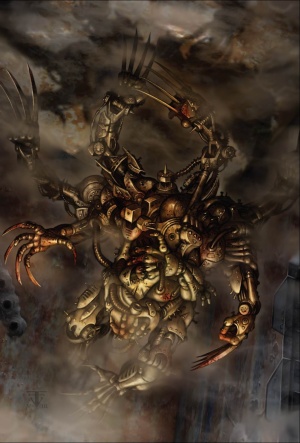 The Bronze Malifects are a strange product of tech-heresy that engulfed the Josian Reach in the Calixis Sector during the latter half of the 8th century in M41.[1]

The Malifects were products of the Augmetic Scholae, the tech adepts responsible for building as well as maintaining cybernetic devices. These machines became Warp-tainted in many diverse locations due to the actions of Heretics who had built malformed machine altars as well as conducted corruptions of the Adeptus Mechanicus rituals. The madness and mind-rust of those involved led to the creation of the Bronze Malifects - ugly arrangements of bronze augmetic infused with a murderous spirit from the Warp.[1]

When inactive, the Malifect appears to be a large heap of war- damaged augmetic arms as well as limbs, making it appear as if a dead Guardsmen had been thrown into the pile. Upon a closer inspection of the machine, the arrangement can appear as the deliberate work of a madman. The autolimbs are plasma-welded together to such a level that they appear as one large device which is capable of both articulation and movement. The machine parts are evident in the design with a stump to a wrist, legs side by side, an arm that projects from a thigh as well as data conduits along with power lines which weave through the whole structure that link small potentia coils as well as scavenged flexor-devices. The sigils of the heretic along with nonsensical machine scripts are also inscribed upon most of the crucial linkages.[1]

When it is active and infused with the power of the warp, the malifcent moves with a malignant purpose with the Daemon-spirit inside guiding the machine beast that senses its terrified victims through an unknown means. The malifcent possesses no ocular components or a processing device that would allow it motion thus the means of how these tainted machines accomplish such a feat is unknown. Bronze Malifects are part of the warp alone; their hunger for death and pain helps motivate these vile creatures that are clothed in metal. These devices often serve as guards and ambushers on remote Machine Temples or drifting medicae vessels that have been touched by the warp. One aspect of its nature that is known that it has a simple minded fascination with medical tools such as saws, scalpels, hooks, clamps and probes. The daemon inside often demonstrates a low cunning as it often lies in wait until its lust for flesh can no longer be denied whereupon it jumps forth in order to stab or choke its victims. The results of their work often leave dead bodies that have been torn apart, sliced into pieces and splayed open as though they were part of a mad vivisectionists experiment.[1]

There are a number of other perversions of medical technology as well as Machine Spirits during the tech-heresy outbreak in the Josian Reach. These include the dead rising and moving on warp-infused machine limbs or the living being driven insane upon operating tables as well as sacrificial altars that are made of scalpels as well as bone saws. However, out of all these monstrous acts, it is the Bronze Malifects that represent the greatest danger to the servants of the Inquisition.[1]