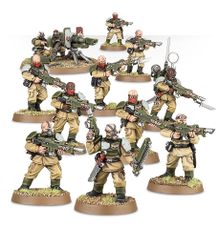 Brood Brothers are the literal brothers and siblings of a Genestealer Cult's hybrids, specifically fourth-generation neophytes capable of blending in with the host society.

Many of these Brood Brothers may be members of the local civil or military authorities, continuing to carry out their normal duties in society. They remain hidden until the cult/clan is powerful enough to completely take control of the host society. They regard and often venerate the Genestealer Patriarch as a grandfather or deity. They are especially fanatic members of the clan, motivated by intense, instinctual bonds to their Genestealer and Hybrid relatives.

The Brood Brothers infiltrate Planetary Defence Forces or local militia, giving the brood the military training and access to weapons they would normally lack. When the cult finally begins its uprising to claim the planet, the brothers will rebel along with their kindred, beginning a campaign of sabotage and guerrilla warfare to wreck planetary defenses and tie down loyal troops.