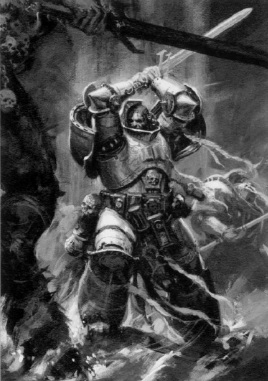 Brotherhood Champions are elite troops of the Grey Knights.[1]

Each is a single champion representing each of the Chapter's Brotherhoods, a warrior who has forsaken all other arts of combat to perfect his swordsmanship. Whilst a Brotherhood Champion holds foremost responsibility for the training of new recruits, his chief duty is to act as a bodyguard to his Brother-Captain. Should a Champion be struck down, he is trained to unleash a final burst of psychic energy into his Aegis Armour. This last impulse impels the suit to temporarily re-knit sinew and bone, and gives the fallen Champion the opportunity to strike one last blow against his enemy. When a Champion finally does pass, his corpse is entombed in the Vaults of Anarch on Titan.[1]

Grey Knights Brotherhood Champions are most commonly equipped with a Storm Bolter and Nemesis Force Sword.[1]