Brotherhood of the Storm (Novella)

Brotherhood of the Storm is a novella written by Chris Wraight and part of the The Horus Heresy series. It was released in September 2012. It was included as part of the "Nine Loyal Primarchs" set for 2016 12 Days of Christmas: Day 9.

As word of Horus's treachery spreads across the galaxy and with fully half of the Legiones Astartes turning their backs on the Emperor, Terra looks to the remaining loyalist Space Marines to defend the Imperium. One group, however, remain curiously silent in spite of efforts from both sides to contact them – the noble Vth Legion, Jaghatai Khan's fearsome White Scars. In the ork-held territory of Chondax, a bitter war has been raging since the Triumph at Ullanor, and only now do the sons of Chogoris return their gaze to the heavens...[1] 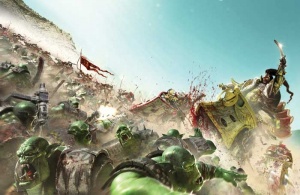