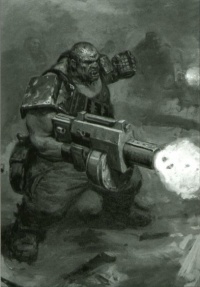 An Ogryn Engaged in combat[5]

Ogryns (Homo Sapiens Gigantus) are the largest and most physically powerful type of abhuman. They make ideal warriors and are often recruited into Imperial Guard regiments, and used as close assault shock troops.[1] 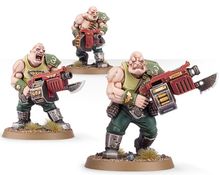 Ogryns evolved on worlds with harsh and barren environments and high gravity. Most of these worlds, having no other use to humanity, were originally used as prison planets.[Needs Citation]

Ogryns are large and bulky, standing between 2½ and 3 metres tall. Ogryns vary in appearance according to world, but all are tough and powerful. Some forms are well-muscled, while others tend more towards grotesque obesity. Stupid and repulsively unhygienic, Ogryns have earned such names as Fats, Flabs, Slobs[9] and Stenches. Ogryn populations produce mutant individuals to the same extent as humans.[Needs Citation] The psychic mutation, however, is unknown among Ogryns.[*]

The Imperium puts the Ogryns' qualities to good use: their strength and lack of intellectual complexity make them ideal warriors for the Imperial Guard. The concentration of the Ogryns' brutal power creates formidable assault forces. Once introduced into the Imperial Cult, Ogryns develop an unshakable and almost childlike faith in the Emperor, seeing Him as watching over their every action on the battlefield. Each order they receive is viewed as having worked its way down the hierarchy from the Emperor, and is followed without question and to the best of their ability. The most intelligent individuals among Ogryns undergo an augmentative chemical process called Biochemical Ogryn Neural Enhancement (BONE), which increases their intelligence further and makes them ideal as sergeants (or Bone'eads) of Ogryn squads.[Needs Citation]

Although Ogryn worlds provide troops for the Imperial Guard like any other inhabited Imperial world, the standard practice of raising regiments is not used for Ogryns. Units of Ogryns are instead attached to the regiments of other worlds. The unit consists of squads, each led by an Ogryn Sergeant who has received BONE treatment, allowing them to communicate orders to their squad. Ogryns have a particular respect for Commissars, who they see as closest to their beloved Emperor. Ogryns are also naturally claustrophobic, meaning they are reluctant to enter the cramped confines of Chimera carriers.[Needs Citation]

During the Horus Heresy, Ogryns fought on both sides of the conflict. It is believed that those who took the side of the traitors were told that they were actually fighting for the Emperor, and the loyalists were the traitors.[Needs Citation]

Outside of the Imperial Guard, Ogryns are sometimes modified by the Adeptus Mechanicus into the cyborg slaves known as servitors and adapted to tasks where great size and strength are required. Ogryns are also used as heavy lifters and miners in some Imperial mining operations.[Needs Citation]

Ogryn squads are armed with ripper guns, weapons designed to be 'Ogryn-proof', built simply and durable enough that they can double as clubs for the close combat inclined Ogryns. They also carry frag grenades and wear flak armour.[Needs Citation][1] 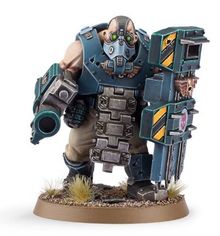 Bullgryn's are specialized heavily armed Ogryn's used for close assault operations by the Imperial Guard. They wear heavy Carapace Armour and carry assault weapons like Power Mauls to capitalize on the creature's size and resilience. For firepower, they often wield the Grenadier Gauntlet. The simple but effective Slab Shields are their trademark, locking together to form a mobile defence line. So deployed, these units provide their comrades with a wall of walking cover as they advance across the battlefield, soaking up vast volumes of enemy fire in the process.[8]

Ogryn Charonites were biochemically and cybernetically enhanced Ogryns used by the Imperial Army during the Horus Heresy.[Needs Citation]

The populations of some ogryn worlds, are so debased and primitive as to be of no other use than as vicious assault troops, the planet having little else to offer the Imperium. Ogryns native to these worlds have been left to develop their own warlike society that many view as little better than that of the Orks who plague the Imperium. In times of crisis, Imperial landing parties will descend upon these feral worlds, capture several tribes, and take the Ogryns to fight on battlefields many light years away from their homes. In combat, feral Ogryns are a terrible sight to behold.

Very few Imperial Guard officers will even try to teach them the relatively complex operation of a ripper gun. Instead, crude but deadly close combat weapons are hastily manufactured for newly raised regiments. Thus, the Ogryns are encouraged to perform in combat as they have become accustomed - as vicious, close-combat troops. In battle, Ogryns are all but uncontrollable. Thus, they are used sparingly, with just 1 or 2 squads being assigned to any one action alongside other forces.[10] 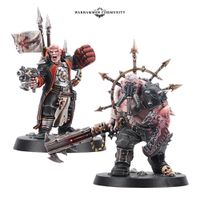 Ogryns are also used by the forces of Chaos. Known as Ogryn Brutes, Chaos renegades are quick to forcibly conscript them into their ranks. They use crude surgical procedures, combat drugs, and sorcerous rituals to control the beasts and set them upon their enemies. Modified and warped by forbidden methods, these include Ogryn Berserkers and Plague Ogryns.[6]

Servitor-Ogryn - Ogryns that have been converted into Servitors.

In 3rd Edition Ogryns were armed with a Ripper Gun and close combat weapon and could replace their Ripper Gun with an Ogryn Close Combat Weapon. The squad consisted of between three and five Ogryns and were still difficult to get into transports.[2]

In 2nd Edition Ogryn squads consisted of five Ogryns with a Ripper Gun, frag grenades and flak armour but this could be upgraded to mesh armour.[3]

In 1st Edition up to four Ogryn Squads could be fielded with an Ogryn-Sergeant and four Ogryns in each. Ogryns, besides the BONE-enhanced Ogryn Sergeants, were poorly equipped, limited to weapons and armour from their feral home worlds. Each Ogryn was armed with a hand weapon, Ogryn frag grenades and primitive armour while their Sergeant was equipped with flak armour, a communicator, a hand weapon and Ogryn frag grenades. He could be armoured with mesh armour and was intelligent enough to be issued a Ripper Gun.[4]

*In 1st Edition there was a 1% chance an Ogryn would be a psyker.