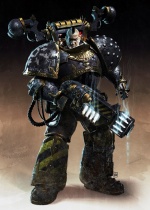 Cadaras Grendel was a Chaos Space Marine of the Iron Warriors.

During the Horus Heresy, Grendel served with the 16th Company of the 2nd Grand Battalion under Warsmith Berossus.[5]

By M41 Grendel traveled as Captain of Arms in the retinue of Warsmith Berossus on Medrengard, during the latter's assault against the renegade Warsmith Honsou's fortress of Khalan-Ghol. Grendel watched as Honsou and his Possessed bodyguard, Onyx, tore open Berossus's Dreadnought carapace, and Honsou crushed the remains of the Warsmith's skull.[1a]

Instead of killing them, Honsou offered Grendel and his fellow warriors a place in his army. At first, Grendel scorned the idea of bowing to a "half-breed" like Honsou, but Honsou shrewdly pointed out that their lord was now dead, and their overlord, Warsmith Toramino, was content to sit back and let them risk their lives in the assault. Recognizing Honsou as a worthy leader, Grendel and the others swore fealty to him.[1a]

Grendel became a member of Honsou's inner circle, along with Ardaric Vaanes, a renegade Raven Guard, and The Newborn, a mutant clone of Ultramarines Captain Uriel Ventris.[1b]

During the Skull Harvest, Grendel defeated several Champions of Chaos, then pretended to defect to Pashtoq Uluvent's warband just before the final bout. This was a ruse that allowed Grendel to ambush Ullvent and render him vulnerable to Honsou's killing stroke. With Ullvent dead, Honsou was the victor of the Skull Harvest, and departed New Badab with a new army and a fleet of warships gifted by Huron Blackheart. Before Honsou departed the Palace of Thorns, Huron indicated Honsou's retinue, including Grendel, and warned Honsou to kill them sooner rather than later, before they turned on him.[2]

During the storming of the Indomitable, Grendel took a point-blank shot from an Inquisitorial agent's inferno pistol, surviving only by a slim margin and leaving his face horribly disfigured.[3x][4a]

Grendel took part in the Invasion of Ultramar with gusto, accompanying Honsou to Calth to destroy the tomb of Remus Ventanus.[4b][4c]

During the final confrontation, Grendel incinerated several Ultramarines from Pasanius Lysane's squad, the Firebrands, with his favoured meltagun, then attacked Captain Ventris.[4d] Unexpectedly, Vaanes intervened, grappling with the Iron Warrior and crimping his skull with a single well-aimed blow.[4e]