This is Cadia, you silly fool! Cadia! Right on the doorway of Chaos! Right in the heart of everything! The seepage of evil is so great, I have a hundred active cults to subdue every month! This place breeds recidivists like a pond breeds scum. This is Cadia! This is the Gate of the Eye! This is where the bloody work of the Inquisition is done!"

Cadia was a terrestrial Fortress World on the edge of the nebula known as the Eye of Terror. The planet was situated in an area of space known as the Cadian Gate, the only stable, permanent route into and out of the Eye of Terror large enough to allow the passage of battlefleets.[5] For this reason, Cadia was heavily fortified against the assaults of Chaos and was a frequent target of Abaddon the Despoiler's Black Crusades.

Orbiting at a distance of 1.32AU from its sun, Cadia was the fourth planet of the Cadian System. It held a breathable atmosphere conducive to human life, with an average temperature of 20°C and surface gravity of 1.12G.[1a] The planet's surface played host to a variety of terrain types, from frozen tundras and wind-swept moorlands to axel-tree forests.[2]

Perhaps the most unusual and significant feature of Cadia were the mysterious Pylons, structures of unknown origins that predated the planet's colonization by man. Five thousand, eight hundred and ten intact Pylons were spread out across the surface of Cadia, with a further two thousand either buried or in various states of disrepair. No two were identical in design, but each one rose to precisely half a kilometer in height and extended a quarter-kilometer into the ground. Each Pylon also featured slim, winding tunnels machined into them, each one no wider than a man's head and exactly two hundred and fifty meters long.[1b][2]

Efforts by the Adeptus Mechanicus to study the Pylons had failed miserably, as their surfaces were totally impenetrable to scanning by auspex and efforts to map the tunnels via Servitors had resulted in missing probes. However, it is widely believed that they were the reason for the existence of the Cadian Gate in the first place.[1b] During the 13th Black Crusade, as the warp storm Baphomael expanded to engulf the edges of the Cadian System, the Pylons simultaneously began resonating with an almost imperceptible vibration, and microscopic fractures began appearing on their surface. It was discovered that they were resonating at an amplitude similar to that produced by a Gellar Field in their effort to fight back against the encroaching storm.[1d]

Access to the Pylons was generally forbidden, with it being deemed a rare privilege to be granted permission to visit if one were not of sufficient military rank.[9c]

During the final stages of the Thirteenth Black Crusade, the Magos Belisarius Cawl worked with the Necron Lord Trazyn to fully activate the Pylons and push the Eye of Terror back. However, in the end, Abaddon collided the debris of the Blackstone Fortress Will of Eternity into Cadia's surface, destabilizing the Pylons as they were fully awakening. In a catastrophic chain reaction, the Pylons were destroyed, which caused Cadia to be dragged into the Warp.[10]

Before Imperial colonization, Cadia was the home of a lost fragment of humanity that worshipped the four Gods of Chaos.[3a] This society was encountered by the Word Bearers Legion forty years before the Horus Heresy, and the prevalence of violet eyes amongst the populace was seen as a mark of mutation caused by the Eye of Terror, which also appears violet.[3b] It was on Cadia that the Word Bearers' Primarch, Lorgar, first met Ingethel the Chosen and became inducted into the service of the Foul Powers.[3a] This civilization was eventually wiped out by Cyclonic torpedoes.[3c]

Cadia was resettled sometime in the early 32nd millennium as a direct result of the 1st Black Crusade.[4a] The early defenses of Cadia, however, proved to be woefully ill-prepared, its major cities indefensible as they were built in the traditional High Terra style of broad, ordered avenues. Following the 2nd Black Crusade, changes were made to improve the planet's fortifications, rebuilding the cities into their present form.[2] 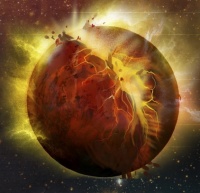 The destruction of Cadia

During the Thirteenth Black Crusade, Cadia was subjected to the largest Chaos invasion since the Horus Heresy. A surprise opening attack by the Volscani Cataphracts wiped out the Cadian High Command, forcing Ursarkar E. Creed to become its sole Castellan.

After vicious fighting, only one fortress, Kasr Kraf, remained. However, the tide of the battle nearly turned thanks to the intervention of Eldar and Trazyn, who sought to reactivate the Pylons on the world and turn back the Warp. In the final battle beneath the surface of Cadia, Abaddon was forced to retreat as the Pylons were activating, but redirected debris from the Blackstone Fortress Will of Eternity into the planet. Cadia was shattered and, as the Pylons faltered, the planet was swallowed into the Warp. Castellan Creed and his Cadian 8th stayed behind to cover the evacuation and their fate remains ambiguous.[10]

Only a handful of its citizens were able to escape in an evacuation fleet led by the Phalanx. Of its population, fewer than three million survived.[10]

Although Cadia was ultimately reduced to a burning wasteland by Abaddon's assault, the worlds in the wider Cadian System fought hard to destroy the spearhead the Despoiler had plunged into their midst. The Great Exodus of Cadia had seen swathes of the Imperial defence redeployed to the sister worlds.[11]

Sometime after the Great Rift's creation, the Adeptus Custodes Captain General Trajann Valoris ordered a small, fast-moving force of Custodians to travel to Cadia's remains. Details of their mission are suppressed, even amongst their comrades, but they are accompanied by a number of warriors drawn from the ranks of the Shadowkeepers.[12] 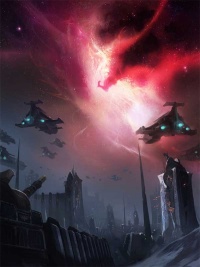 Imperial forces keep watch on the Eye of Terror from the surface of Cadia.

As one of the most strategically important planets in the Imperium, Cadia boasted a large military presence. Battlefleet Cadia provided orbital protection for the planet and could call upon the assistance of neighboring sector fleets such as Battlefleet Agripinaa, Battlefleet Corona and Battlefleet Scarus.[1a] The planet's surface was dotted with numerous orbital defense batteries, its skies were patrolled by flights of Imperial Aircraft, and any incoming civilian craft that failed to transmit the daily access codes were liable to be shot down without question.[2]

As a Fortress World, Cadia's entire population belonged to some branch of the Imperial military. Perhaps most famous of all are the Cadian Shock Troopers, regiments raised for service within the Imperial Guard. The Shock Troopers are considered some of the finest soldiers in the entire Imperium, even earning the respect of the legendary Adeptus Astartes.[5] Cadians are well-known for their discipline, marksmanship and stoic sense of self-sacrifice, and are often emulated by other regiments.[1c]

The Planetary Defense Force, known as the Cadian Interior Guard, was also counted among one of the best military organizations. This is because one out of every ten Cadians, regardless of their skills, was assigned to the Interior Guard, resulting in some of the best soldiers spending their entire military career on Cadia.[1b]

Cadian society was heavily militarized, with 71.75% of its total population under arms,[1a] and a birth rate equal to the recruitment rate.[6a] Cadian children were taught how to strip, reassemble and shoot a lasgun before they were taught how to read. Prior to puberty, they were sent to survive on their own on the isolated islands of the Caducades Sea during the Month of Making, and by age ten most could perform infantry field drills and were proficient in killing.[2] All Cadians were to train in the defense forces, joining the Youth Armies (also known as the Whiteshields) to train alongside regular soldiers and fight mock battles with each other in the Cadian wilderness.[6a] Both men and women served within front line roles in both mixed and single sex regiments, with all female regiments tending to serve within the Interior Guard rather than off-world[9b] All told, about half of all able-bodied Cadians would join the Shock Troop regiments and be shipped off-world to fight on distant planets, with only one in a thousand ever returning to their place of birth.[14]

Cadia was under permanent martial law, leading to a number of differences when compared to other Imperial worlds.[2] The role of Planetary Governor was a military one, known as the Governor Primus, similarly serving as leader of the Cadian High Command. In times of emergency, when the Governor Primus was incapacitated, a special military rank of Lord Castellan of Cadia existed that by common consent could take over as commander-in-chief of the Cadian military.[6b] Also, there were no Arbites on Cadia, with the role of policing the population falling upon the Cadian Interior Guard.[2]

This martial theme extended its way into every aspect of life on Cadia. Civilian clothing incorporated camouflage patterns, available in a variety of urban and wilderness colouring, while the dwellings of both rich and poor were armoured against attack.[2] Cities on Cadia, known as Kasrs in the local dialect, were fortresses in their own right. Each Kasr was protected by powerful Void Shields capable of withstanding days upon days of punishing orbital bombardment.[14b] They were encircled by rings of massive earthworks studded with gun emplacements and weapons batteries, separated by an inner moat. Passage over the moat was controlled by hydraulic bascule bridges, each one guarded by a heavily armed barbican, and defended by the many armored fortifications and shatrovies overlooking it. Once inside, the streets of each Kasr were laid out in elaborate geometric patterns, from the air resembling an intricate puzzle.[2] Every building was constructed to act as a strongpoint in the city's defense: ammunition dumps stored in the underground bunkers of bakeries, gun emplacements on public auditoriums, hab-blocks with reinforced buttresses and vision slits for windows, living rooms which doubled as pillboxes, bastions with rooftop landing pads. Given the Cadians' mastery of urban warfare, this layout allowed them to hold each Kasr for months, even years, should the outer defenses fall[14c] Tens of thousands of different criminal gangs operated throughout the densely populated Kasrs, with ganger tattoos common amongst the troopers raised from these populations[9a]

Social class on Cadia was dictated by military rank, which in turn lead to the upper echelons of command within the Cadian regiments to be highly classist - importance being placed on being from a military family or one's bloodlines as well as military competence.[9d][9a]

The ever-constant death toll from Chaos incursions, combined with the limited amount of land available, had also lead to the implementation of the Law of Decipherability. Every graveyard on Cadia was maintained by local priests who routinely checked the tombstones of the honoured dead for legibility. When a section of the cemetery was deemed illegible, those graves are exhumed and the bones were added to a communal pit. Because their names were no longer known, the need to honour their memory had passed, and the space could be reused.[2]

Most Cadian have purple eyes - the genetic heritage of this planet.[15]

Cadia was heavily industrialized with a large population of skilled workers dedicated to producing military equipment.[5] This allowed Cadia to outfit its Shock Troopers with only the best military equipment. Such was the rate and scale of production on Cadia that it was the largest exporter of arms and munitions in the region.[4b][6a]